So, you’re creating a fantasy religion for a story or game. When your characters need to interact with their gods, where do they go—if anywhere at all? Down the street to the local temple? To the top of a windswept mountain? To a corner of their kitchen? Today we look at religious sites in historical cultures to inspire our imaginations.

We can start by looking at religion in today’s world. Look at the religious life of a modern western community and you will find some people attending their local church, synagogue, or mosque, some people praying quietly in their own homes, some feeling inspired by solitary walks in the woods, some debating points of theology over the internet, some participating in celebrations of religious holidays, and some not involved at all. Many people will do more than one of the above. No culture or religious tradition is monolithic, and this is just as true in the past as the present. The history of religious expression is one of incredible variety both across and within cultures.

The “assembly” type of religious space will be recognizable to anyone familiar with major variants of the modern monotheistic religions. It is a space where a community of believers gathers to perform collective rituals such as praying, singing hymns, hearing sermons, feasting, and witnessing or participating in ritual enactments.

END_OF_DOCUMENT_TOKEN_TO_BE_REPLACED

Sometimes writing fiction means not just moving a few characters around the map but planning entire campaigns for massive armies. In previous entries in the travel series we looked at some basic issues and how small groups travel on foot. For large groups on foot, much of what we discussed in those entries is relevant, but large groups of people, like armies or mass migrations, bring with them their own set of problems. Today we’ll look at some basic questions in the movement of large groups: How large is “large?” What did it take to make the journey successfully? How far could they travel? And how fast?

This post is written with a particular focus on armies, since they are the best-studied large groups that traveled in the pre-industrial world, but any sufficiently large group of people traveling by foot would face the same basic problems.

END_OF_DOCUMENT_TOKEN_TO_BE_REPLACED

The majority of the stuff that needs to get done in an agrarian society is basic manual labor: primarily farm work, but also things like construction, building and road maintenance, mining, carrying, housework, etc. Any functioning pre-industrial society needs lots of workers to do all that work, but there are many different kinds of workers, some of which are not so familiar to us today. Some of these kinds of workers had it much better than others.

Here’s a list of possibilities, by no means exhaustive, arranged roughly in order from worst to best conditions.

END_OF_DOCUMENT_TOKEN_TO_BE_REPLACED

Writing a fantasy story or role-playing scenario? Need to come up with names for towns, rivers, mountain ranges and so on, but tired of thinking up new names all the time? Here’s a handy technique I use. It takes a little work up front, but then it makes coming up with new names really easy.

The thing about place names is: when you dig down deep into their meaning, they’re usually really obvious and descriptive. It’s only time and language change that obscures their meaning.

Look at a map of Europe and you’ll find Copenhagen (“merchant harbor”) and Dublin (“black pool”). In Asia there’s Shanghai (“above the sea”) and Samarkand (“stone fortress”). The same applies to the native names anywhere else in the world. In places that have experienced substantial colonization, the conquerors often imported old names that didn’t relate to the landscape (New York, Wellington), but in other cases the new names given by colonizers were just as descriptive (Cape Town, Salt Lake City).

The reasons for this naming pattern are fairly straightforward. If you live in a landscape where there are several rivers, but only one of them is muddy, or plenty of mountains, but there’s a big one with no trees on top, when you need to refer to that river or that mountain, you’re likely to say: “the black river” or “the bald mountain.” From there it’s only a short step to calling them “Black River” and “Bald Mountain”. As time goes on and language changes, place names tend to become fossilized and preserve older variants and meanings that the rest of the language has left behind.

So, put these facts to work for you. When you’re setting up your map, generate a list of place name elements and then you can quickly combine them to make new names for whatever you need.

Here’s how it works:

END_OF_DOCUMENT_TOKEN_TO_BE_REPLACED

We have some berry bushes and a few fruit trees in our back yard. Every spring I plant a few vegetables in a couple of small patches (some years they produce; other years they just wither under the care of my brown thumb). It’s nice to be able to go out back and pick a cucumber or a handful of raspberries, but it doesn’t sustain us. If we had to feed ourselves on what we can produce, we’d be dead in a matter of weeks.

The same is true for most of us in the industrialized world. In the modern west, only about 3% of the population is engaged in primary food production, which is to say: actually producing edible things from nature. Farmers, ranchers, and fishermen (along with some more niche specialists like bee-keepers and salt miners) are in a very small minority today. That 3% manages to feed all the rest of us, but only because of a host of modern technologies: mechanized farming, chemical fertilizers and pesticides, antibiotics, refrigeration and canning, cheap long-distance transport, and so on. Pre-modern societies had to feed themselves with none of these advantages, which means that food production required a huge amount of labor.

END_OF_DOCUMENT_TOKEN_TO_BE_REPLACED

A lone river winding through the desert. A pair of wide plains. A fragmented land of islands and mountain valleys. When you’re building a world, the land matters. The land we live in shapes the way our societies work. To see what this means, let’s look at a few examples: ancient Egypt, ancient China, and classical Greece. We’ll be zooming way out and looking at these cultures on a very large scale. 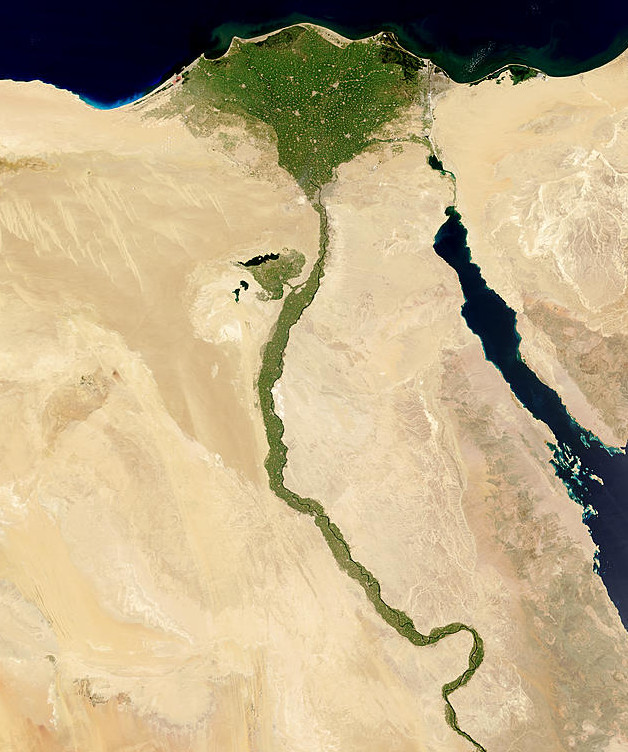