One unexpected thing to come out of Marvel’s The Falcon and the Winter Soldier—have you seen it, by the way?—is definitely this video clip:

Not only is Daniel Brühl’s performance great—he looks bored and baffled, and yet simultaneously slightly entertained, until he seems really to enjoy himself.

But. Baron Zemo. Dancing in a disco! Looped for an hour? Made and uploaded by Marvel itself, not a fan?!?

I think it’s absolutely hilarious, which makes me think either I’m completely out of the cool loop, or Marvel actually did manage to hit the zeitgeist on the nose, or it’s all haphazard. Or all at once, LOL!

I’m the kind of geek you can (within reason) egg on to doing something by saying most people don’t act in a particular way or do whatever it is you’re describing.

Case in point: our high school math teacher told us that most people won’t ever learn the approximation for pi further than 2 or 4 decimals places. So, I had to go and memorise it to 8 decimal places. I can still remember it: 3.14159265.

Don’t ask me why it was so important to me—I can’t remember anymore. I am, however, surprised that I can still produce it without any hesitation whatsoever even though I haven’t used it in decades. (It only works in Finnish, though; clearly there’s some connection with the rhythm and sounds that made it easy for me to memorize.) I wish I was as speedy with my U.S. social security number, for instance. 🙂

P.S. For a full appreciation of my dorkiness, look at the tags for this post. :p

Messing with numbers is messy.

I was browsing some Doctor Who reading on the latest iteration of the Doctor herself when I saw this photo of Jodie Whittaker in costume:

The new Doctor Who is– a WoW gnome?!?

Images: Jodie Whittaker as the Doctor by Sophie Mutevelian / BBC Studios 2018 via TV Guide. World of Warcraft screencap cropped from one by Cindy on LiveJournal.

I love geeks and nerds, and being a geek / nerd. Sometimes it occurs to me, though, how terribly odd it must look like seen from the outside. Exhibit 6,430: the exchange below that Erik and I had last weekend:

Me: *mumbling to myself, trying to remember a detail from Star Wars*

Erik: … I don’t know what that’s about, but I’m okay with living in a house where a random “Han Solo” is a thing that happens.

I’m okay with my life choices. 😀

Incredibly, a fight scene from Thor: Ragnarok kind of goes with an 80s pop track:

Thor Ragnarok – I NEED A HERO!!! FUNNY via Locus on YouTube

The song in the background is “Holding out for a Hero” by Bonnie Tyler. Impressive job matching some of the punches on screen to the music.

Then I made the mistake of looking up the original music video. Oh, boy…!

Image: Confused cat via Meme Binge on Flickr (CC BY 2.0)

Time for the annual turkey day! We’ll be off for the next week or so for Thanksgiving.

If you’re celebrating, hope you’ll have a good one!

Image: screenshot from the World of Warcraft Critter Gitter achievement with turkeys

In the morning, my logic brain was busy blocking the day and arranging my To-Do list, when the art brain suddenly burst out with “Don’t stand– Don’t stand in– Don’t stand in the fire!”

The joke comes from Erik’s previous online comic, Away from Reality. AFR is a World of Warcraft fan comic, and this one, number 115, is called “Don’t Die So Close to Me”.

Of course, having been jolted out of my multitasking-while-not-realising-it state, I had to sing the whole thing. Multiple times. 🙂

He’s tanking so badly, he doesn’t even see.

He got too distracted. He full of rage inside.

He should have been moving–

Instead he stood and died.

(The tune is “Don’t Stand So Close to Me” by The Police.)

While my To-Do list probably would be in a better state had I finished it at one go, my day was definitely made. Thank you, art brain. 😀

I was amused the other night when, while playing World of Warcraft and re-watching Warcraft: The Beginning (the movie based on WoW), I flew my toon into Stormwind just as Alliance troops were forming up on the bigger screen: 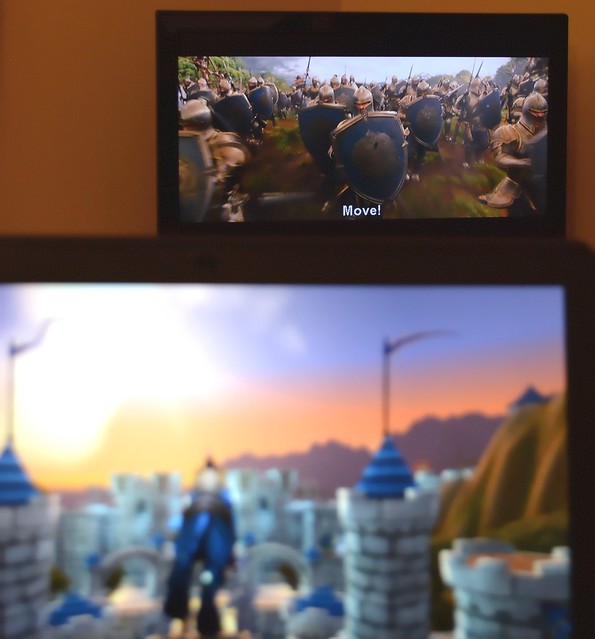 It’s not quite Inception-level nesting, but I felt very geeky. 🙂

Advice books are nothing new. Here’s an example from late Medieval Europe:

“Those who have weak stomachs should sleep face down, for it will aid digestion and will not allow phlegm to accumulate through the increase of natural heat which stiffens the harmful humors. Moreover, it is extremely helpful to sleep at first on the right side, then on the left. No one on their right mind should sleep lying on their back.”

This rather strongly worded hint is found in a Latin-language cookbook De honesta voluptate et valetudine by Bartolomeo Sacci (1421-1481; better known as Platina). Platina’s work was published c. 1474, and is often called the world’s oldest printed cookbook. It’s more than a collection of recipes, however; it also included his reflections on health, healthy habits, and physical activity, for instance.

A scanned version in Latin (with full record) is available through the Rare Book and Special Collections Division of the Library of Congress.

As a side-sleeper, I (very non-seriously!) agree that sleeping on your back can’t be good for you. All of those wicked humors must then be free to wander around your body, you know… 😉

Two days until the opening day for Arrival—I am so excite!

And because interplanetary communication can feel like a chore, here’s a classic, slightly relevant Sesame Street clip: