With this awesome geeky Perler bead wreath, I wish our U.S. readers as restful and relaxing a Thanksgiving as possible under the circumstances.

May the writers’ room have an exceedingly boring 2020 season ender in store for all of us. The world sure could use a respite from the coronavirus.

Image and tutorial by Aki at Minted Strawberry

We’ve been watching some Lincoln documentaries and movies plus various Lincoln-adjacent media recently. This LOL-worthy moment comes from the movie Gettysburg:

“Any man who judges by the group is a pea-wit.”

Context: union soldiers Sergeant Buster Kilrain (pictured) and Colonel Chamberlain were having a discussion on the racism that Black people experience. (Apparently this Kilrain is an invented character.)

Well, he put it concisely and politely!

I can’t say I knew much at all about the U.S. Civil War, but during this Lincoln spell of ours I have learned much, including about Colonel Joshua Chamberlain and the 20th Maine, and feel very co-proud—their resilience at Little Round Top really reminds me of the Finnish Winter War. Go, small northern states with obstinate, resourceful populations!

As most of you probably know, there are currently multiple protests against racism and police brutality after the killing of George Floyd in the U.S. that have spread worldwide.

I have so many things to say, but I’ll spare your eyeballs because there would be a FUCKING INCONCEIVABLE ABUNDANCE OF EXPLETIVES. But if there’s a pared-down version I want to say to my fellow white folks, especially if you’re a Christian, it’s this:

“You shall not follow a majority in wrongdoing; […] you shall not side with the majority so as to pervert justice.”

– Exodus 23:2, after The New Revised Standard Version of The Bible

I was brought up Christian and my grandfather was a policeman, and I cannot fucking fathom how many white people are apparently fucking fine with police essentially executing BIPOC or attacking peaceful demonstrators without any consequences.

If you believe you are a Christian, especially a white one, especially one working as a police officer, there’s only one side in all of this that you can possibly take.

For example, if you think it’s acceptable to

then you are a part of the problem. No ifs or buts.

If you are a police officer and said yes to any of the above, you are, in actual fucking fact, a member of a violent cult and an oathbreaker, and belong in jail.

(No, rioting isn’t okay, but I do understand a little where all the anguish and rage is coming from.)

Comments are closed. This is not a subject that is even supposed to be under discussion.

Here there be opinions!

Each February, if conditions allow the seasonal Horsetail waterfall in Yosemite National Park in California to flow, the waterfall appears to be set ablaze by the setting sun. This event is known as the firefall (apparently as homage to Yosemite Firefall).

Just stunning! Why hasn’t anyone put this kind of an effect into a story yet—or have I just missed it? Anyone know???

Abraham Lincoln, later the President of the U.S., is reported to have reacted to the white supremacist movement of 1840s thus:

Whoa, that’s pretty pointed. Granted, it’s decades since my U.S. history classes—not that we were taught that much to begin with, the focus was always on our fellow Nordics, Europe, and Russia—so it’s no wonder I can’t remember coming across this view of Lincoln’s.

July 20, 2019, is the 50th anniversary of the Apollo 11 mission—the spaceflight that landed the first people on the Moon.

Ben Feist, a software engineer and historian at NASA Johnson Space Center, and a team of other experts put together a website for Apollo 11 video, audio, and pictures of the astronauts and mission control.

The site consists entirely of original historical mission material, with data and audio restored plus transcripts corrected. There’s video, too, and views of the Earth receding and Moon showing up in the viewscreen, various details from the lunar surface, and support teams back home. And a whole host of additional data.

Image: screencap from the Apollo 11 in Real Time website by Ben Feist

Some power reading on gender and power, especially at Anglo-American financial companies:

“My Kleiner colleagues said that I sucked the air out of the room, that I ‘wasn’t the warmest person.’ Now [after leaving] I’m told the opposite. I’ve thought a lot about how I was accused of being cold and unlikeable at Kleiner. Looking back, maybe I was. But it wasn’t because I’m a cold person. It was because I needed to have my guard up all the time. You can be warm and vulnerable with people you trust, not with those who you know are trying to keep you down.”

I can attest from personal experience, even if not in the same environment.

On Monday, November 26, 2018, NASA Television is bringing coverage of InSight’s Mars landing to a website or social media near you!

There are a few pre-landing broadcasts, and on the landing day, coverage will start early in the morning. The landing itself is expected to take place from 2 to 3:30 p.m. EST, with post-landing news conference to wrap up the event.

Wow, sounds incredible. Even though the cameras are “only” inside JPL Mission Control and the mission itself will be covered by audio “only”, it’s the closest I can get to experiencing touching down on another celestial object. I will have to make time for this!

Time for the annual turkey day! 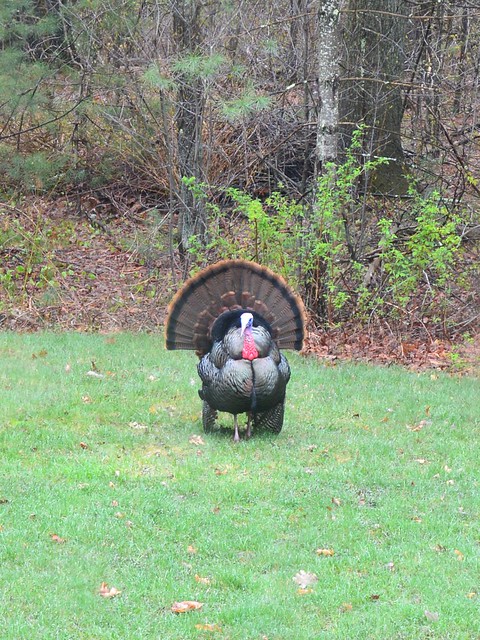 We will not be eating this handsome fella from our back yard. 🙂

We don’t necessarily get to see the turkeys displaying every spring, but often we do. It’s always such a sight—incredible birds in so many senses.

Happy Thanksgiving to our readers who celebrate!

Apparently in Pennsylvania, there’s a town—Centralia—all but abandoned due to a coal mine fire that’s been burning underground since 1962.

There is disagreement over the cause of the fire. It seems that one way or another a surface fire moved into the system of mining tunnels below the town.

The effects are indisputable and scary: unstable ground, sink holes, damaged roads, plumes of hot steam, vents of smoke and toxic gases (like lethal levels of carbon monoxide), and, finally, evictions plus abandoned and/or demolished buildings.

Speculative fiction that takes place in a post-catastrophy world of some sort immediately comes to mind, and no wonder. Even the little that I read gave me a glimpse on the variety of reactions people can have to major environmental disruptions and their aftermath. Not to mention that photos of the abandoned parts of Centralia are stunning. They remind me of Pripyat after the Chernobyl nuclear accident, which is the closest equivalent I can think of from my childhood in Finland.