In The Light Brigade, what I consider her most mature work yet, Kameron Hurley gives her protagonist Dietz this monologue about hope’s role in shaping human behavior:

“There’s a huge mental release in knowing there is an end to pain. A human being with hope can continue on far longer than one without. Did you know those who are mildly depressed see the world more accurately? Yet they don’t live as long as optimists. Aren’t as successful. It turns out that being able to perceive actual reality has very little long-term benefit. It’s those who believe in something larger than themselves who thrive. We all seem to need a little bit of delusion to function in the world. That belief can be about anything, too. Could be a god, a corporation, a society, like our various militaries instill. A sense of belonging. Could be national pride. Or the desire to make the world a better place. Or see the world burn. Personal or political. But … something bigger. Something greater.”

We’re six to seven months into the covid-19 pandemic, depending on your definition of the epidemic start date in the western world. I could use some mental release right about now, and I know I’m not alone.

Alas, as far as we know, nothing specific is in the pipe to be released very soon. But there is hope!

The good news is that by all accounts SARS-CoV-2 will respond to a vaccine. The bad news is that we need to wait and be patient, stay home as much as possible; and when we cannot, keep a safe distance, practice good sneezing hygiene, wear masks, and wash our hands.

Stay on target. Stay safe. We will prevail.

Images: Obi-Wan Patience via Giphy. Stay on Target via Giphy.

This quote from Kameron Hurley’s The Light Brigade seems pretty apt for the covid-19 pandemic in the west:

“[Companies] started losing when they forgot how to be decent. People will fight for the idea of decency. They will fight for someone who treats them like people. They fight for beliefs far longer and harder than out of fear.”

So let’s treat each other as people. Because we’re in this together; health care experts don’t talk about herd immunity without reason.

Because we’re only in the beginning of it; even the most optimistic models don’t predict the peak to occur very soon.

And because we’re social critters, descendants of people who liked other people despite their origin or color or dance moves or whatnot. We’re here because we like doing things together. (And I realize how funny that may sound coming from a huge introvert such as myself, but there it is.) At each individual’s preferred amount of togetherness, but together nevertheless.

Arkady Martine wrote at Tor.com on disaster stories and human behavior, noting a pattern on concentrating on the catastrophic and awful. That, however, has been proven a myth, at least initially:

“Humans do not, under the pressure of an emergency, socially collapse. Rather, they seem to display higher levels of social cohesion, despite what media or government agents might expect… or portray on TV. Humans, after the apocalypse, band together in collectives to help one another—and they do this spontaneously. […]

“Humans all over the world display this behavior after disasters. They display it consistently, no matter what kind of disaster is happening or what culture they come from.

“What really happens after an apocalypse? Society works better than it ever had, for a brief time.” [original emphases]

Yay, us! We did evolve as and still are highly social creatures.

Now, how long this century’s phenomenal technological change takes to alter that and in which ways remains to be seen. I have high hopes of our curiosity and drive to engage with others, however. That may be a bit funny for a huge introvert to say, but there it is. 🙂

Apparently in Pennsylvania, there’s a town—Centralia—all but abandoned due to a coal mine fire that’s been burning underground since 1962.

There is disagreement over the cause of the fire. It seems that one way or another a surface fire moved into the system of mining tunnels below the town.

The effects are indisputable and scary: unstable ground, sink holes, damaged roads, plumes of hot steam, vents of smoke and toxic gases (like lethal levels of carbon monoxide), and, finally, evictions plus abandoned and/or demolished buildings.

Speculative fiction that takes place in a post-catastrophy world of some sort immediately comes to mind, and no wonder. Even the little that I read gave me a glimpse on the variety of reactions people can have to major environmental disruptions and their aftermath. Not to mention that photos of the abandoned parts of Centralia are stunning. They remind me of Pripyat after the Chernobyl nuclear accident, which is the closest equivalent I can think of from my childhood in Finland.

Speaking of the excellence of museum and library collections: below are resources on the destruction of Pompeii I found by visiting only two museum sites.

“A Day in Pompeii” is an 8-minute high-definition video on how a series of eruptions wiped out Pompeii over 48 hours, produced by Museum Victoria (Melbourne Museum) and Zero One Animation for an exhibition at Melbourne Museum in 2009.

A Day in Pompeii – Full-length animation via Zero One Animation

It would’ve been more stunning with changes in the POV rather than a static camera, but it was still interesting.

To accompany the exhibit, Melbourne Museum produced a wealth of additional online material.

Unfortunately there’s currently no index page, but articles are still available on the Museum website (do a search for Pompeii). For example, House of the Vine is a nifty virtual recreation of a beautiful Pompeian house. And did you know that Pompeii had running water and lavatories? There is even a replica of a loaf of bread from Pompeii: 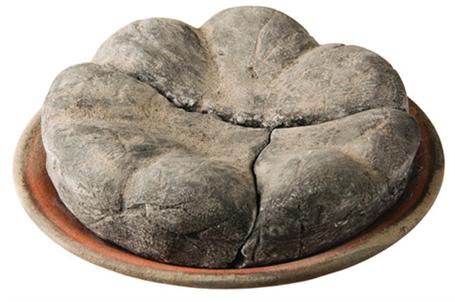 After Melbourne, the exhibition traveled to other places. The Western Australian Museum also built a helpful site, still fully available, to go with their 2010 version in Perth.

Complementary views can be found from photos of the current state of the city at Pompeii in Pictures, website by Jackie and Bob Dunn. (Getting to the photos themselves takes a bit of clicking through the menus, but they’re there.)