In Lima, Peru, artist Xomatoc and local residents painted a number of stairs with colors and combinations more typically associated with traditional South American blankets and other textiles.

This project was a part of the Pinta Lima Bicentenario. Xomatoc’s project was only one of public art installations painted around the municipality to celebrate each participating neighborhood’s history and cultural memory.

The length of the stairs, the vibrant colors, and the large enough scale of these patterns make them really eyecatching. And, good grief, the degree of the slopes! (I grew up essentially on a flood plain, which is why mountains look so drastic to me.) The stairs definitely will be visible a long way.

The city of El Alto in Bolivia, high up in the Andes, is the country’s second largest city and right next to the third largest one, La Paz. Something that El Alto beats its richer neighbor in is unique eye candy right on the building facades.

Information on Silvestre seems scant in English. A member of the indigenous Aymara, he apparently started working on buildings as a bricklayer. There’s a feature on El Alto in The New York Times in 2013 and in The Washington Post in 2014. He’s referred to in a 2014 BBC News article on president Evo Morales. The Architectural Association, Inc., still has their exhibition info Salones de Eventos from 2015 available online. I also found two articles via the German Wikipedia entry for Silvestri: one in The Architectural Review and the other in Quartz, both from 2015. The best bet at the moment might be the 2017 book El Alto by Silvestre and Peter Granser. For Spanish readers there’s more, including the 2014 book La arquitectura de Freddy Mamani Silvestre.

Silvestri draws on traditional shapes and colors in his designs. Some of the detailing reminds me of jugend (I believe the phrase art deco is used in the U.S. instead), but Silvestri’s work is clearly not derivative of it.

If the exteriors seem colorful and detailed, just wait until you see the interiors! 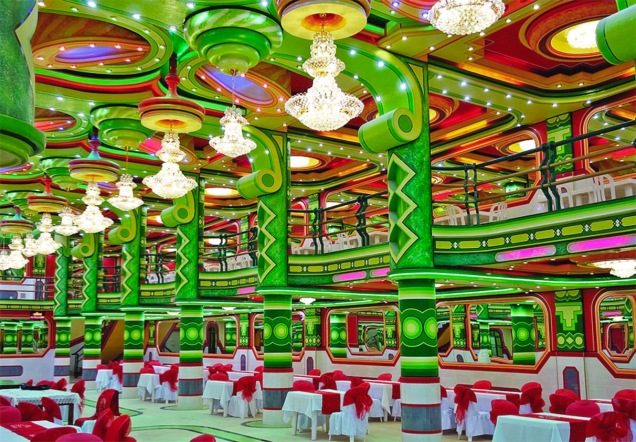 Wow! His style has been described as Neo-Andean, new Andean, space-ship architecture or, plainly, kitch. However you may want to describe it, the word colorful will have to be there!

The basin of Lake Titicaca, on the border between Bolivia and Peru, is one of the few places in the world where large-scale, complex societies have developed independently, out of contact with other, earlier large-scale societies. Between about 500 and 1000 CE, the people who lived at the site of Tiwanaku, on the modern-day Bolivian shore, built a number of megalithic structures using highly accurate stonecutting to fit together enormous blocks of intricately carved stone.

In the past millennium and a half, these structures have been the victims of neglect, colonial looting, and reconstruction efforts driven more by the impetus to create suitably impressive national monuments than by archaeological evidence. As a result of these pressures, the various Tiwanaku structures are now in a very poor state and it is difficult to know how they were originally put together, what they looked like, or how they were used.

Now a team of archaeologists has brought a new approach to the problem. Working with the site known as Pumapunku, or the Gate of the Puma, they used data from earlier efforts to measure and reconstruct the surviving stones at the site to create small 3D printed blocks with a high degree of precision. These small blocks could be quickly and easily reassembled to test various ways of reconstructing the site and find a reconstruction that fit the original pieces together. Theories that are impossible to test on the ground, given the enormous size of the stone blocks and the fragile condition of the site, were easy to try out with the scale model blocks.

This experiment yielded some important new results. Where earlier archaeologists had reconstructed sections of what they believed to be a single long wall, the team discovered that those sections actually fit together better to create a rectangular enclosure, similar to some other, earlier sites in the region which can now be looked to as a basis for better understanding Pumapunku.

As a historian, I’m excited by the potential this new approach offers to archaeologists for reconstructing damaged or poorly preserved structures. As someone who used to spend hours playing with Legos, I’m thrilled to see such interesting applications for plastic bricks!

How It Happens is an occasional feature looking at the inner workings of various creative efforts.

Out in the deserts of the Nazca region of southern Peru there are spiral-shaped holes bored into the ground. These holes are connected to networks of underground channels that bring fresh water from subterranean aquifers into the arid landscape. The spiral holes help the system work by channeling wind into the tunnels, which increases pressure and forces the water to move to where it is needed. These water systems are called puquios.

It is not known just when the puquios were constructed. Textual sources from the early days of the Spanish conquest do not mention them, but neither is there any record of them having been built post-conquest. They seem to be related to indigenous settlements that date to the first millennium CE, and some samples of organic material from the construction have been dated to the 6th-7th c. CE. On balance, the evidence suggests that they were built by precolonial cultures.

Despite their age, many of the puquios are still functioning and delivering water to desert communities today. What an interesting alternative they make for something so fundamental as water systems!

Image: Spiral entrance to the puquios, photograph by Ab5602 via Wikimedia