The Inca empire of South America was connected by a network of roads used by chasqui runners and pack llamas carrying messages and supplies around the empire. The Inca, creating their empire in the Andes mountains, faced challenges unlike those of flat-land and river-valley empires, among which was the problem of crossing numerous steep mountain valleys and rivers that ran dangerously swift in the flood season. Their solution to this problem was: rope bridges.

Suspension rope bridges spanned rivers and valleys, the longest reaching a length of 45 meters. They were made with ropes twisted out of grass and had to be rebuilt every year or two. The rebuilding was dangerous work that was assigned to local villagers as part of their obligation to the empire. Most Inca bridges have long since been replaced with modern structures, but one, the Q’iswa Chaka over the Apurimac River in Peru, is still rebuilt every year by local people as a way of preserving their heritage. 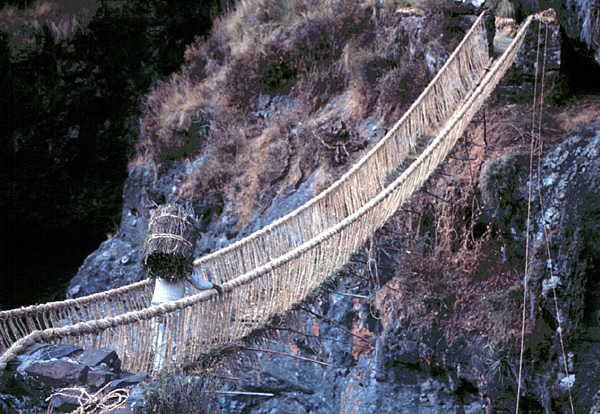 The bridges were part of a road network that connected all parts of the empire and facilitated the movement of troops, food supplies, information, and trade goods. All large empires in the pre-industrial age had to cope with the problems of transportation and access. Information about growing problems had to be able to reach the central authorities and orders, military forces, and supplies had to be able to get where they were needed before a local problem could become a national crisis. Much like the Inca, the Romans, Chinese, Persians, and Mongols, among many others, maintained similar road networks. Suspension bridges like the Inca examples were built in many parts of the world, including the Himalayas, China, and Mesoamerica, but no empire’s road network was as dependent on rope bridges as the Inca.

Inca bridges are a good example of an important aspect of worldbuilding: landscapes have consequences.

The Inca road system is similar to the road networks of other large empires, so why didn’t they build bridges of wood or stone as other peoples did? It was not for lack of technology. Inca architecture shows expert skill in working with wood and stone and in some high-traffic areas bridges were built of stone and timber. These bridges did not have to be replaced every year or two. If the Inca chose to build rope bridges in most places, the design must have had an advantage.

For one thing, rope bridges are cheaper to build. They can be made with local materials using local, mostly non-expert labor and don’t require the expensive transportation of cut stone or the time of a skilled mason. Empires that needed only a few bridges in a local territory could afford to invest resources in each one. The mountainous territory of the Inca empire made this level of expense unsupportable. A length of road that in Rome or Persia might require only a few bridges could require hundreds in the Andes.

Speed of construction and ease of maintenance are also important concerns created by the landscape. Building a rope bridge requires only a few days of work as opposed to the weeks or months it takes to build a bridge of wood or stone. Lowland empires could afford to spend the time it took build the few bridges they needed; the Inca could not.

The long and narrow shape of the Inca empire, running along the Andes mountains, affected the shape of its road system. Unlike other empires’ road systems, which mostly radiated out from major cities, the Incan road network was based on two main roads, one on the coast and one in the mountains, with minor connecting roads between them. A break in either of the main roads would have seriously affected the flow of traffic in the whole system, so it was critical that bridges, especially those in remote areas, could be maintained and repaired quickly by locals.

Landscape matters and not always in ways that are obvious. When building a new world for stories or games, it’s important that we think carefully about how societies respond to the conditions around them. Even something as unexpected as bridge construction techniques are deeply connected to the landscapes in which they developed.