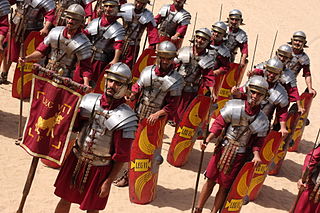 Sometimes writing fiction means not just moving a few characters around the map but planning entire campaigns for massive armies. In previous entries in the travel series we looked at some basic issues and how small groups travel on foot. For large groups on foot, much of what we discussed in those entries is relevant, but large groups of people, like armies or mass migrations, bring with them their own set of problems. Today we’ll look at some basic questions in the movement of large groups: How large is “large?” What did it take to make the journey successfully? How far could they travel? And how fast?

This post is written with a particular focus on armies, since they are the best-studied large groups that traveled in the pre-industrial world, but any sufficiently large group of people traveling by foot would face the same basic problems.

How large is “large?”

Large groups have to deal with problems that small groups don’t, but how large is “large?” There’s no simple answer, but since the problems that large groups face mostly have to do with terrain and supplies, the rough answer is: “large enough to have trouble finding enough room to make camp and to put a strain on local food and water supplies.” In barren, rocky badlands, that could be a little as a few dozen, while in fertile plains it could be a few thousand. For most inhabited areas in a pre-industrial world, more than a few hundred people traveling together will count as a large group.

What did it take?

This question has to come next because it has a significant bearing on those that follow. There is an old saying, attributed to various military officers: “Amateurs talk about tactics; professionals study logistics.” There are a lot of things that go into the logistics of a pre-modern army, but one issue comes before all else: food supplies.

As we noted for small group travel, people doing hard work, like marching long distances, need about 3 kg of food and water each day. Of that weight, a little less than half is water, which under good conditions can be found in the wild. Armies and other large groups travel along rivers, lakes, oases, and other fresh water sources when at all possible because it significantly reduces the weight of supplies they need to carry. But even when water is taken care of, an army needs to supply about 1.5 kg of food for each person per day. (Engels, 123-6)

There are some options other than carrying all the food with the troops. Foraging is possible in farmed lands in the right season, but it takes a lot of time and tends to anger the local population (if you care about that sort of thing). Troops may also be able to buy locally-produced food in the market, but this requires a well-developed existing infrastructure for transportation and trade.

Both of these means of supply depend on sufficient food being available in the region. The food yield for any given area of farmland depends greatly on the crops produced and the methods of cultivation. Under the conditions of modern farming, using mechanical equipment and chemical fertilizer, edible crop yields average 2,000 to 3,000 kg / hectare. Ancient agriculture was less efficient and for most staple crops (wheat, rice, corn, etc.) under typical conditions, yields were around 400-600 kg / hectare. Most of that yield went to either sustaining the farming population or saving seed for future crops. At a generous estimate, each hectare of farmland might have produced 100-200 kg of surplus food per year. (Clark and Haswell, 152)

An army of 10,000 consumes 15,000 kg of food every day, or the entire annual surplus production of about 75-150 hectares. (More if the army also includes cavalry or transport animals.) A typical medieval village in England had around 400 hectares under cultivation. (Fowler, 155; Schofeld, 41) An army of 10,000 would exhaust the annual food surplus of such a village in just a few days. In a fertile area well-connected by waterborne trade, like Mesopotamia, a large army could sustain itself on the local market for much longer periods of time. (Jones)

The alternative to living off the local land was to keep an army supplied with food from the homeland. This requires a major investment in logistics and limits the movement of the army to areas that can be reached by supply lines.

As far as they could get food. As with small groups on foot, large groups could theoretically travel as far as there was land to walk on, but large groups face logistical problems unlike those of small groups, so for practical purposes, there were some areas and terrains that were closed to them.

An army carrying its own supplies through barren lands while traveling on foot will run out of food in less than two weeks, which means that an army cannot travel more than two weeks away from food and water sources without risking major losses to starvation. Unless there is a substantial supply operation, large deserts and areas of uncultivated ground are effectively impassable to an army on foot.

If an army is living off supply lines, its movement is limited by the need to stay in regular contact with the supply operation. Bulk cargo like grain can be carried much more efficiently over water than over land, so wherever possible a waterborne supply line is preferable to wagons, pack animals, or human carriers, but an army dependent on waterborne supplies will have to stay within a few days’ march of navigable waters.

Rocky terrain and mountains also pose a bottleneck problem. Wherever the ground limits the number of people who can pass at once, an army’s speed is limited by the number of people who can march through the bottleneck at one time. This impediment may make mountains and other rough ground that is manageable for a lone traveler a practical barrier to the passage of an army.

Average walking speed for a human being is about 4-5 km/h, depending on terrain and weather. While on the march, an army of footsoldiers travels at about this speed. The difficulties come at the beginning and end of the day, because the whole army cannot simply start and stop marching at the same time. Armies march in columns whose width is determined by the width of even ground available to march on. This width could vary from a little as one soldier to as many as hundreds, but very narrow columns are impracticably slow and suitable only for the roughest terrain, while wide columns are unwieldy to command and keep in good order. Wherever possible armies march along roads, which limits the width of the column. Bridges, fords, mountain passes, and any other restriction on the width of passable ground would bottleneck a wide column. For all these reasons, pre-modern armies tended to march with a column width of 4-10 soldiers, favoring the lower end of the range. 6 is a good average to use for estimation purposes. (Goldsworthy, 108)

Each rank of soldiers in the column needs about 1.5 meters of space (more over rough ground or at night). Allowing for a little slack, a well-drilled column of 10,000 soldiers would stretch about 3 km while on the march. From when the front rank left camp in the morning until the rear started marching would take about an hour, and the same at the other end: from when the head of the column stopped marching it would take about an hour for the rear to catch up with them. Any slowdowns or pauses along the route of march would have ripple effects through the column, much like how traffic jams on highways can persist long after an obstruction has been cleared away.

All told, a typical day of marching for an ancient army could cover from 25 to 32 km. Small parties of lightly armed troops covering good terrain with secure supply lines could routinely move faster, but pushing beyond 32 km in a day for most forces was difficult. Forced marches of 40 km were possible, but took a serious toll on the health and morale of troops.

As always, a group can only move as fast as its slowest member, and large groups always have slow members. This is one reason why marching was such an important part of training for new recruits. The ability of every individual soldier to reliably cover a given amount of ground in a day was critical to the functioning of the whole army. Every army also had to deal with the problem of sick and wounded troops, whether caused by combat or accident on the march. An army that had to carry its invalids with it was necessarily slower. Whenever possible, ancient armies on the march would leave the sick and injured behind to recover in friendly cities or fortified encampments (hopefully to rejoin the main force when they could) or discharge them and let them fend for themselves.

The history of pre-modern warfare shows us that wars were often won not by tactical ingenuity but by being able to place well-rested, well-fed soldiers in the right places at the right times. However much we may want to focus our stories and games on the battlefield action and its heroes, staying in touch with realism means thinking seriously about the problems of terrain, routes of march, and supplies.

What goes for armies also goes for large trade caravans, mass migrations, and any other large group that stays together and travels by foot. Walking all day is hard work and those who do it need to eat, drink, and rest. Most ancient communities could handle a stray wayfarer or two dropping in for dinner and a place to sleep, but thousands of people passing through all at once would be tremendously disruptive without extensive planning and preparations.

The estimates and figures offered in this post provide a place to start in planning the logistics of your own imagined armies and migrants. Check out the other entries in the travel series for more useful details about getting your characters from here to there.

Engels, Donald W. Alexander the Great and the Logistics of the Macedonian Army. Berkeley: University of California Press, 1978.

Schofeld, Phillipp. “The Social Economy of the Medieval Village in the Early Fourteenth Century.” Economic History Review 61, no. S1 (August, 2008): 38-63.