I first became aware of Adrian Tchaikovsky when he won the Arthur C. Clarke Award in 2016. I’ve been meaning to check out his writing since then. Ironclads, a limited-edition hardcover novella, finally made it to the top of my TBR pile last month.

The novella was great in several respects, but I was especially tickled by the American POV character’s descriptions of Finland and Finns. For example:

“All the middle of Nordland is the bit we’ve got problems with, basically: Sweden and Finland, say the maps. Sweden is where the fighting is, and the other place… Finland is weird. Finland is different.“

The version of U.S. in the story is fighting in Scandinavia, and, due to having laxer laws on genetic modification, Finland apparently has become home to very interesting types of special forces.

But the best, the absolutely best detail is mentioned in this section: 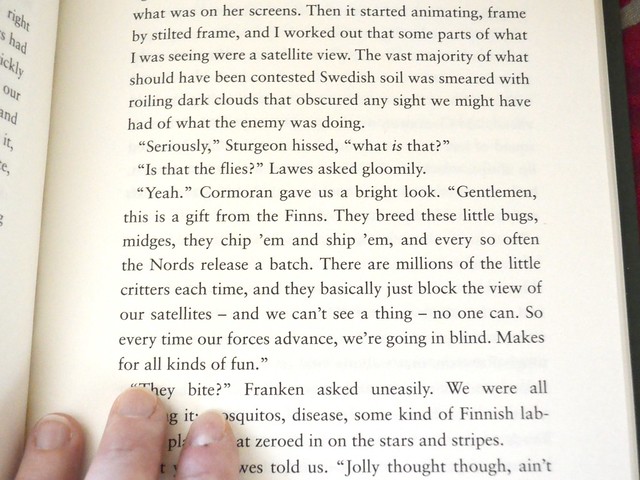 “[F]or a long time I couldn’t even work out what was on her screens. Then it started animating, frame by stilted frame, and I worked out that some parts of what I was seeing were a satellite view. The vast majority of what should have been contested Swedish soil was smeared with roiling dark clouds that obscured any sight we might have had of what the enemy was doing.

“’Seriously,’ Sturgeon hissed, ‘what is that?’

“’Is that the flies?’ Lawes asked gloomily.

“’Yeah.’ Cormoran gave us a bright look. “Gentlemen, this is a gift from the Finns. They breed these little bugs, midges, they chip ’em and ship ’em, and every so often the Nords release a batch. There are millions of the little critters each time, and they basically just block the view of our satellites – and we can’t see a thing – no one can. So every time our forces advance, we’re going in blind. Makes for all kinds of fun.’

“’They bite?’ Franken asked uneasily. We were all thinking it: mosquitoes, disease, some kind of Finnish labgrown plague that zeroed in on the stars and stripes.

The militarization of mosquitoes! We already joke—as a way of dealing with an irritant that’s just a part and parcel of life—that mosquitoes are the Finnish air force. Finally, someone did it! 😀

It makes perfect sense in a world with aggressive biological research to turn a ubiquitous pest into an asset. Come to think of it, it sounds very much like the strategies that Finns used in the Winter War of 1939-1940 against Soviet forces—making native conditions work for you and against the enemy.

Of course, no one person can disapprove or approve of any characterization on behalf of their whole group. However, in My Official Opininon As a Finn, Tchaikovsky managed to balance well the view of Finland as part of Scandinavia with Finns being distinctly different from their Swedish, Norwegian, and Danish cousins. Also, he got so many little details right, like the way the Finnish language sounds, or our deep appreciation of nature.

I practically tore through the book. Kudos!