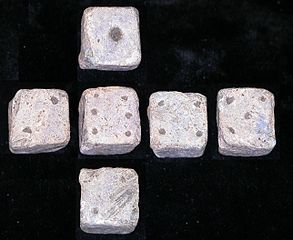 The ancient Romans celebrated the holiday of Saturnalia on this day, the 17th of December. (At least in early Roman history it was a one-day holiday; later, it was extended so that it started on the 17th and lasted through the 23rd.) Saturnalia was a festival of good cheer and relaxed social strictures, thought of as recreating a lost golden age ruled over by the god Saturn. Typical practices included feasting, gift-giving, and a holiday from the usual social rules: children got to order their parents around while adults played children’s games; the masters of the household served a feast to their slaves; and gambling, which was a popular passtime but not usually allowed in public, was freely tolerated.

Romans played many different gambling games, but some of the most popular involved dice. One common game, known as tali, was played either with the knucklebones of sheep or goats (called astragals) or with cubical six-sided dice marked with the numbers 1 through 6, like modern dice. Astragals had four sides. For gaming purposes, it seems they were assigned values of 1, 3, 4, and 6. When playing with six-sided dice, only those numbers were used; 2 and 5 were ignored.

The rules of tali are not entirely understood today. Probably there were many different variations with different rules, and all of them were so common that no one bothered to write down instructions for how to play. Here is a playable modern interpretation based on what we can gather from literary references and artistic depictions.

All you need for any version of the game is four six-sided dice and something to bet with (coins, poker chips, chocolates—whatever you like), although a pencil and piece of paper for each player to record their throws can also be useful.

Each player pays an ante into the pot.

Each player then rolls four dice, either their own set or taking turns with a common set.

Each player’s roll is then scored, and the winner takes the pot. If no one wins a round, everyone rolls again. If two or more players tie, only those players roll again until someone wins.

Dice rolls are scored according to the following system in which “hands” of dice are ranked, much like hands of cards in the modern game of poker.

B wins this game with a Senio of 10. Even though D’s roll totals higher, it has no 6, and therefore automatically loses.

The version of tali described above is perfectly playable, but it’s a simple game of chance with no real strategy. Here are a few ways you can make it more interesting. (All these variations use the same scoring system described above.)

Each player rolls their dice in secret and hides the total (or, if using a common set of dice, records their roll in secret). After an initial bet, players raise, call, or fold in turn, as in poker, until everyone calls or folds. The players still in the game then reveal their rolls and the winner takes the pot.

Each player rolls their own dice (this variation is difficult to manage with common dice). Any player may then ante into the pot again for the chance to reroll a die. Repeat either for a limited number of rerolls or until everyone passes. The player with the best roll on the table wins the pot.