Kiruna is a small Swedish town of about 17,000 people in the Norrbotten county and the northernmost town in Sweden. And it’s on the move to escape a literal undermining.

The Kirunavaara iron ore mine (run by the state-owned LKAB) is expanding too close to the town center. Already in 2004, it was decided that a new center would be built; a site some 3 km away was since selected. 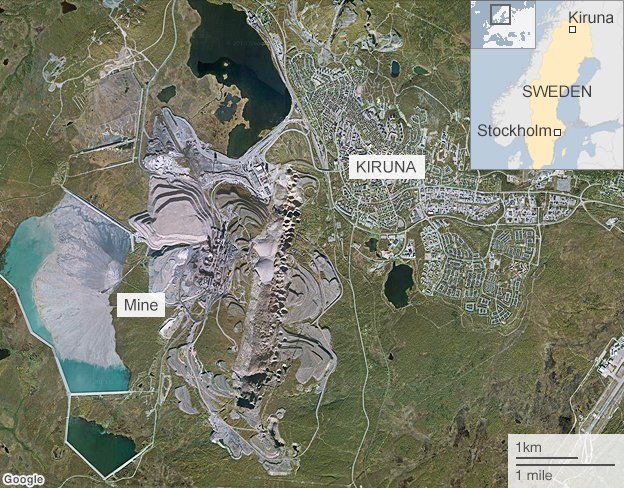 Also, according to the 2010 decision by the municipal council, some of the westernmost areas of town—in fact, if I’ve understood it correctly, most of them—would also be razed and new areas built eastwards, so that the town gradually moves away from the mine. At least if things go according to an ambitious plan that runs up to the year 2100.

The new areas were planned to be more walkable, with better public transit, close to shops and other amenities that are hoped to attract residents. The move also involves moving the railroad and the local highway.

The map diagrams below show projections for high-density (red) and low-density (green) population areas from 2018 to 2100, and serve as an easier way to wrap one’s head around a massive moving project like this:

At this writing, a new town hall (called Kristallen or The Crystal), the first building in the relocated city center, has been in use for about a year and a half. Some of the valuable heritage buildings have been disassembled and/or moved intact to a new location.

It sounds like a staggering project, doesn’t it? But it’s not like we humans haven’t dreamed up and then built on a massive scale before.

Read more at Ghilardi + Hellsten Arkitekter AS. Also the Kiruna municipality has a page for the project (in Swedish only).

How It Happens is an occasional feature looking at the inner workings of various creative efforts.