Cara Buckley’s 2019 article in New York Times talks about how environmental concerns have been depicted in some recent superhero and sci-fi movies. Climate change may have been moved to the back burner in recent news; nevertheless, in the beginning of the article there is a very important, timely nugget:

“Humans ruined everything. They bred too much and choked the life out of the land, air and sea.

“And so they must be vaporized by half, or attacked by towering monsters, or vanquished by irate dwellers from the oceans’ polluted depths. Barring that, they face hardscrabble, desperate lives on a once verdant Earth now consumed by ice or drought.

“That is how many recent superhero and sci-fi movies — among them the latest Avengers and Godzilla pictures as well as ‘Aquaman,’ ‘Snowpiercer,’ ‘Blade Runner 2049,’ ‘Interstellar’ and ‘Mad Max: Fury Road’ — have invoked the climate crisis. They imagine postapocalyptic futures or dystopias where ecological collapse is inevitable, environmentalists are criminals, and eco-mindedness is the driving force of villains.

“But these takes are defeatist, critics say, and a growing chorus of voices is urging the entertainment industry to tell more stories that show humans adapting and reforming to ward off the worst climate threats.

“’More than ever, they’re missing the mark, often in the same way,’ said Michael Svoboda, a writing professor at George Washington University and author at the multimedia site Yale Climate Connections. ‘Almost none of these films depict a successful transformation of society.’ [emphasis added]”

Even though a pandemic is a very different kind of beast compared to apocalyptic-level climate catastrophes, the current covid-19 epidemic can surely feel like a devastation. I’ve certainly seen my share of panicky social media messages. 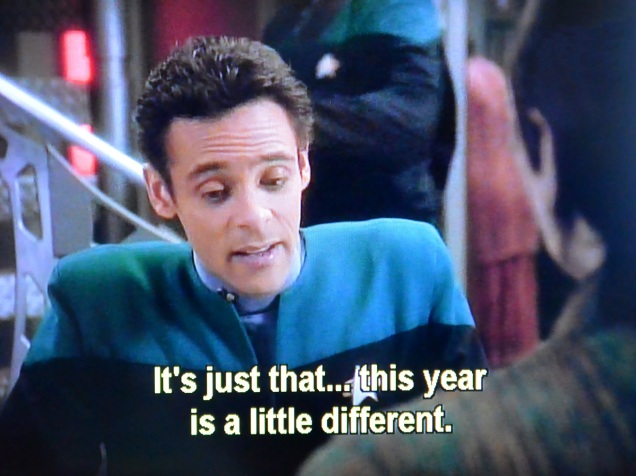 “It’s just that… this year is a little different.”

Indeed—this year is different. Unlike good Doctor Bashir’s, though, our situation is a little more dire than turning thirty years of age.

Right now there’s no long-term data available, so any estimates of the long-term effects are guesses—at best cautious, at worst wild—but every opinion I’ve seen says the world will change as a consequence. And as a nerd, that interest me.

I can’t think of many speculative stories off the top of my head where the society has adjusted in a way that focuses on our shared humanity. On the contrary, most of them cannot seem to be able to find much good in human behavior during crises. Since social collapse at the beginning of a disaster is a myth, I’d like to see more stories concentrating on people working together. (That is my favorite kind of story for a reason, after all.)

There is one thing I do know, though, limited in scope as it is: I will be most seriously displeased if writers and producers of the future fail to learn from witnessing the amount of cooperation and outpouring of help people are providing not only their own communities but also strangers.