In between seasons 4 and 5 of new-series Doctor Who there is a series of specials starring David Tennant, but our copy of the discs turned out to be defective, so while we wait for a good opportunity to replace them, our rewatching and rating project carries on to season 5. 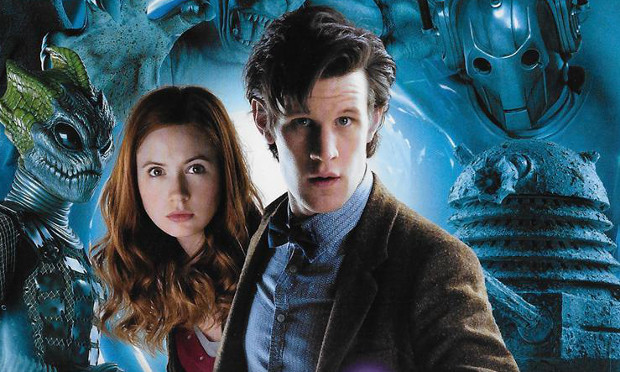 The average rating for this season is a rather dismal 3.7, a big come-down from season 4’s 6.9. Nothing rises above a ho-hum 6, and almost half the episodes this season rate less than a 4, which is pretty much our minimal cut-off for ever wanting to see an episode again.

This season of Doctor Who poses one big question, and that question is: what on Earth happened to Stephen Moffat?? Many of our favorite episodes of previous season were written by Moffat: “The Empty Child” / “The Doctor Dances” in season 1, “The Girl in the Fireplace” in season 2, “Blink” in season 3, “Silence in the Library” / “The Forest of the Dead” in season 4. All these episodes were intricately-constructed masterpieces in which every piece fit, every tantalizing question had a satisfying answer, and the gee-whizery of the sci-fi was balanced with sensitive emotional stories. We had great expectations for Moffat’s first season a showrunner, and instead we got… this? The writing is clunky, the plots are full of janky bits that don’t fit, the characters are unpleasant, and the whimsy feels forced. We wonder whether the demands of production didn’t leave him time to develop his scripts more fully, or if perhaps the quality of his earlier scripts depended in part on good editing by the previous production team.

The new cast doesn’t improve matters. We don’t care for Matt Smith’s interpretation of the Doctor, which relies too much on surface wackiness and feels emotionally hollow. But even worse is the new companion, Amy Pond, played by Karen Gillan. All credit to Ms. Gillan for her acting, but the character is written as a whiny, self-centered bully. Both of these characters reflect an unappealing turn in Moffat’s writing, also visible in his series Sherlock: the belief that if a person is very clever or otherwise special, they get a pass on basic human decency. That’s a position we can’t get behind.

The lowest-rated episode of this season is “Flesh and Stone,” at 1.5. It’s the second part after the rather decent “The Time of the Angels,” following the Doctor’s adventures with a band of futuristic warrior priests in an underground labyrinth filled with Weeping Angels. The first episode give us a reasonably good set-up which the second just fails to pay off. The momentum built up in the first part sputters out as the second part pays its dues to the season-long “crack in the universe” arc. The Weeping Angels were one of Moffat’s most interesting creations in “Blink,” but they would have been better left alone than recycled for this episode.

The best episodes, both at 6, are “The Time of the Angels” and “The Big Bang.” “The Big Bang” does a better job of delivering the old Moffat magic with a complicated time-woven story about the Doctor and his friends racing to stop the end of the universe that was set off in the previous episode. It has some good moments and finally gives Amy’s Stockholm Syndrome victim boyfriend Rory something to do, but it never quite rises to its potential.

All in all, a real let-down of a season for us, but we know there are other folks out there who feel differently, including fans of Amy Pond and Matt Smith’s Doctor. What episodes this season did you love (or not)? Let us know in the comments!

Image: Doctor Who season 5 via IMDb