We’re continuing to rewatch and rate Doctor Who (new series) with season 2. Here’s how the season looks to us: 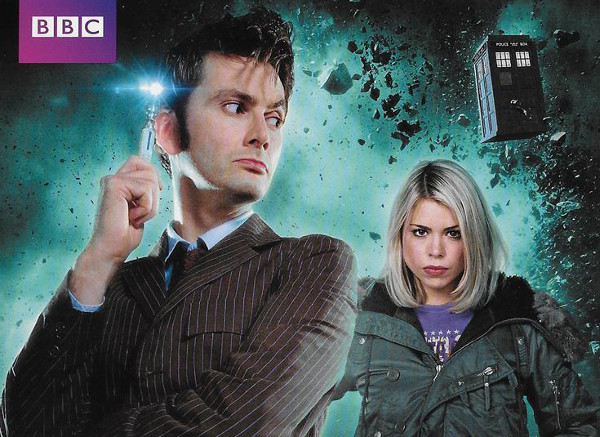 Season 2 carries on much in the same spirit as season 1, with a mix of highs and lows, and ends up with the same average rating, 5.3. David Tennant slides easily into his role as the tenth Doctor, although we found Rose started to wear thin as a companion in this season and by the end of it we weren’t sorry to see the back of her. (In fact, by the end of the season, we were much more excited to see her erstwhile boyfriend Mickey return than to see any more of Rose.)

The low point of the season comes at the very end, with “Doomsday”—the conclusion to a two-part finale in which Cybermen and Daleks fight in the skies over London—coming it at only a 2. Many things dragged this episode down, including the ham-fisted introduction of Torchwood, which had been teased all season long. Worse, coming after some of the well-crafted storytelling in previous episodes, this one chucks out any attempt at story development or narrative logic in favor of Daleks and Cybermen trash talking each other.

By contrast, the best episodes of the season, “Tooth and Claw” and “The Girl in the Fireplace,” both at 9, show off how effective the slow unfolding of complex stories can be. “Tooth and Claw” has Queen Victoria menaced by an alien werewolf in the Scottish highlands while “The Girl in the Fireplace” has Madame de Pompadour menaced by clockwork robots from the future. Although both these episodes involve historical women in danger, neither is a “damsel in distress” story, as both Victoria and Madame de Pompadour get to play active roles in their stories. These episodes also share a pattern of multi-layered plots in which things that seem bizarre and inexplicable at first gradually become clear as pieces of the story fall into place one after another.

We know there are lots of other Doctor Who fans out there, and some of you probably feel quite different about this season and its episodes. We’d love to hear your take. Let us know which episodes of season 2 worked for you or didn’t.

Image: Doctor Who Season 2 via IMDb