Here’s a look at how we made yesterday’s Flotsam and Jetsam.

Merry describes the available food pretty clearly and we have stayed close to it. (3.9) The only substitution we have made is ham for salted pork. The two meats are similar, but salt pork is fattier and closer to (what Americans call) bacon. Ham is meatier and more satisfying for a meal. We added fresh sliced apples to go with the ham, reasoning that if Minas Tirith has apples in storage, Isengard’s storerooms probably had the same. (5.1) Our toast was made with bakery bread a few days old, like the Isengard bread that was “three or four days old.” (3.9) 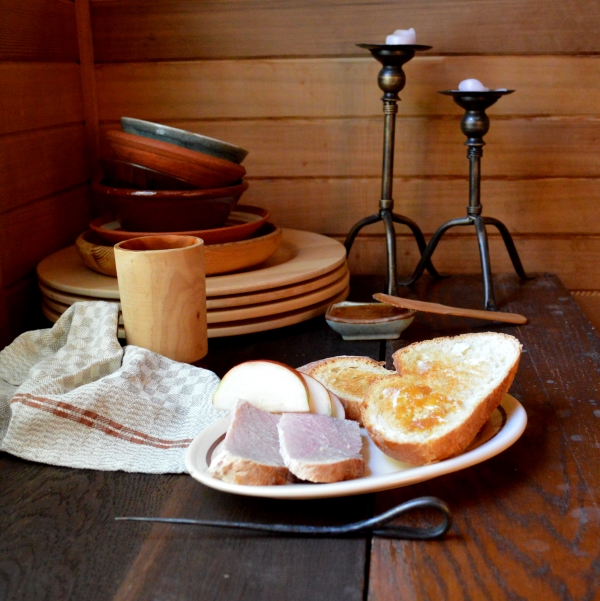 Our ham was a small portion from a local farm and was not pre-cooked. Roasting times will depend on the size of your ham, so use a thermometer to make sure that the meat reaches a temperature of 160 F / 70 C. 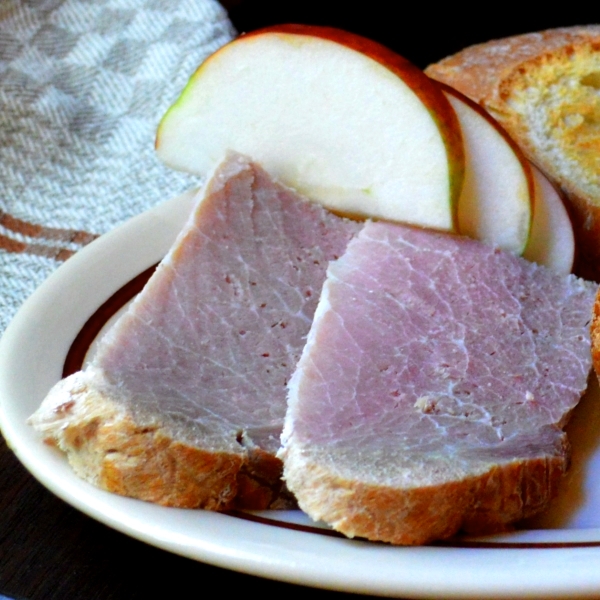 Unlike Peter Jackson’s movie, Tolkien’s version of the Isengard sequence actually includes a meal shared between the two Hobbits and Aragorn et al. It takes place indoors in a guard-house hewn out of stone. Other than the presence of “a hearth and chimney,” “a long table,” and “dishes, bowls, cups, knives and food of various sorts,” we hear few details. (3.9) 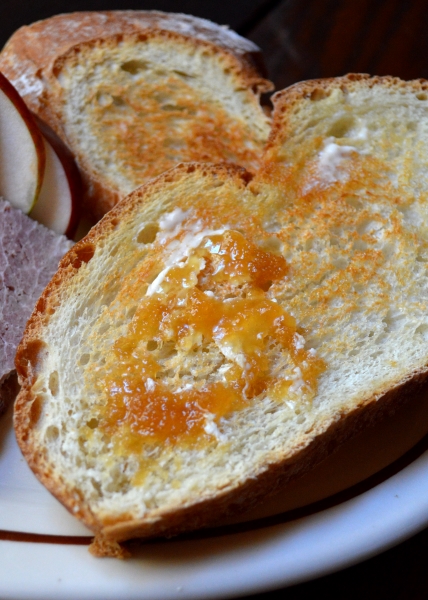 Finding a location for our photoshoot was a bit of a problem. You may have noticed that after the first four dinners, we’ve moved away from our initial spot; the desk we used was too narrow and too close to the wall for a good variety of setups. Since then I’ve tried several different areas of the house and even outdoors, but haven’t landed on a single place that has everything I want. Anyway. 🙂

We don’t have access to a stone structure that sounds suitably like Saruman’s guardroom. We do, however, have a room with wooden walls and a built-in bench that could stand in for a table: our sauna. We decided it was non-typical enough of an indoor space for our purposes. In the end, I decided to add two old table leaves on top of the built-in bench because I quite liked their worn surface for this purpose.

The setting in the ruins of Isengard sounds quite bare, but not ascetic. I chose therefore not to have a tablecloth, but added a simple unbleached linen napkin. In addition, I selected simple ceramic and wood dishes like the oval plate and the turned wooden tumbler. There’s a plain wooden knife for spreading butter and honey on toast, and an iron eating stick for spearing the ham and apple. On the side, one of our sushi sauce bowls masquerades as a honey dish. 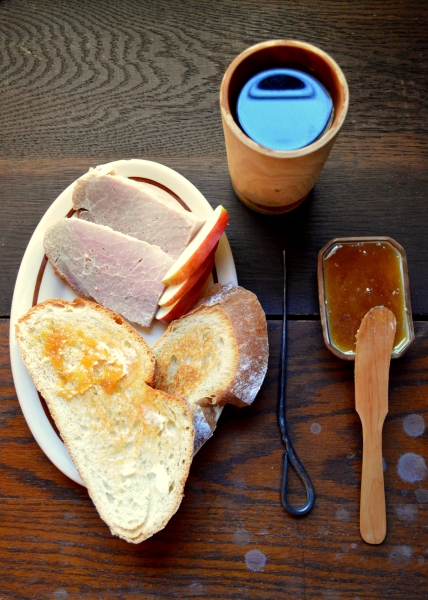 Finally, purely for mood purposes, there is a stack of extra plates in one corner and two candlesticks in the other. I used candle stubs, for Saruman doesn’t strike me as the kind of leader who makes sure their underlings have sufficient supplies handy at all times.

If I were to do this dinner setup again, I don’t think I’d have large changes to make. (Unless I could find a fancy stone room like Tolkien’s text describes.) Perhaps I’d consider adding a butter dish, but that’s about it.