Creating medieval(esque) city maps just got a lot easier: Oleg Dolya (watabou) made an automated generator to do it. 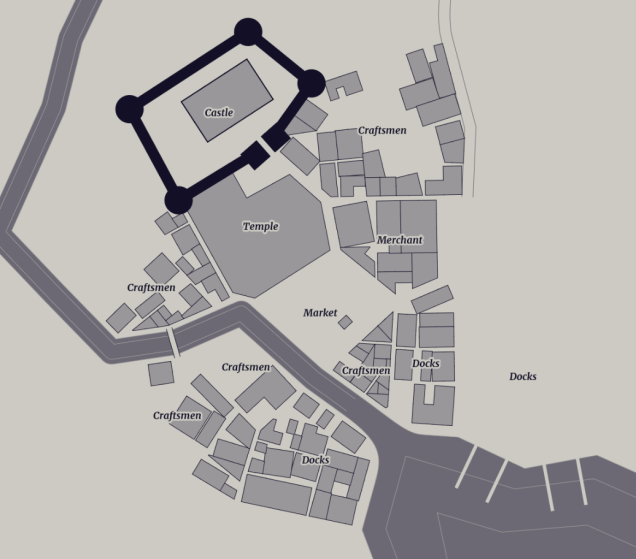 Choose size of city with the click of a button, and color scheme and line or shading types from the options. You can export the image either as png or svg. Unfortunately the ward names (temple, merchant, crafts, etc.) aren’t saved on the exported map, though.

Watabou also built a 3d-visualiser to support Medieval Fantasy City Generator called Toy Town. Although I haven’t played with that, it sounds like both should be a great help to storytellers—unless you enjoy the process with paper and pen, of course!

Image: screenshot from a map created by Eppu Jensen with Medieval Fantasy City Generator by watabou 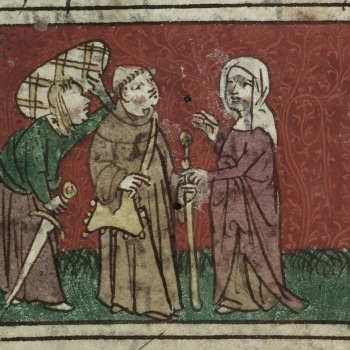 The open access, open source teaching and research tool offers manipulable scans of the manuscripts alongside transcribed texts in their original language and in new English translations. Also a brief introduction for each text is included, providing a commentary on the text’s cultural context and transmission history, its content, and the scholarly conversation around it.

Texts are searchable by genre, author, period, language, and keyword. The GMS also includes a few audio files of specialists reading the texts in their original language.

Sounds like a fascinating resource! I’m especially intrigued by the audio files, since that’s not a typical resource in medieval text databases. Stanford seems just to be getting started, however, since at this writing only some dozen or so texts are included in the sourcebook. I also encountered some glitches, hopefully to be fixed shortly.

Out There is an occasional feature highlighting intriguing art, spaces, places, phenomena, flora, and fauna

Advice books are nothing new. Here’s an example from late Medieval Europe:

“Those who have weak stomachs should sleep face down, for it will aid digestion and will not allow phlegm to accumulate through the increase of natural heat which stiffens the harmful humors. Moreover, it is extremely helpful to sleep at first on the right side, then on the left. No one on their right mind should sleep lying on their back.”

This rather strongly worded hint is found in a Latin-language cookbook De honesta voluptate et valetudine by Bartolomeo Sacci (1421-1481; better known as Platina). Platina’s work was published c. 1474, and is often called the world’s oldest printed cookbook. It’s more than a collection of recipes, however; it also included his reflections on health, healthy habits, and physical activity, for instance.

A scanned version in Latin (with full record) is available through the Rare Book and Special Collections Division of the Library of Congress.

As a side-sleeper, I (very non-seriously!) agree that sleeping on your back can’t be good for you. All of those wicked humors must then be free to wander around your body, you know… 😉

The Viking age apparently is a bit of a thing in the Nordic countries this year: in addition the brand new museum in Stockholm, Vapriikki museum centre in Tampere will host an exhibition on Viking-age life in Finland starting this summer.

The exhibit covers village life in 1017. It’s based on the discovery of and archaeological finds from a whole Viking-age village called Tursiannotko in Pirkkala at the shores of lake Pyhäjärvi.

“It was the time of the Vikings. In the village of Tursia, people cultivated the land, traded, made sacrifices to the gods, and ate large amounts of pork. Both the Vikings and the Novgorodians sought the riches of the Häme wilderness; however, one small village of indomitable Häme folk still held out against the enemy…

“To celebrate the centennial of Finnish independence, the Birckala 1017 exhibition allows visitors to travel through time and visit a village in Northern Häme a millennium ago. You will get to know smithing skills, about cooking outdoors, and the principles that guided life for the Finns of the past […]”

On display will be, for example, bone arrowheads, decorated spoons, beads, tools, and a sword dated to 1050-1200 and its replica. Many items are being shown to the public for the first time.

Apart from the exhibit indoors, a yard with replicas (and non-replica sheep!) is available for trying out some of the iron age skills.

Vapriikki in housed in an old factory hall whose oldest parts date back to the 1880s. All the exhibits are covered by a single entry ticket. More info on the Vapriikki website.

It’s an unavoidable fact that when we look at historical artifacts, we’re looking at things that are many years old, sometimes centuries or millennia. Physical objects, even those made of enduring materials like metal or stone, are changed by the processes of time. Exposure to light, moisture, changing temperatures, air pollution, wind, water, and other effects works changes on artifacts that can range from subtle to drastic. Our sense of what history looks like is shaped by things that no longer look like what they were when they were first being made, admired, and used by people in their daily lives.

Take, for example, the sculptures and architecture of ancient Greece. Our perception of ancient Greek art is shaped by the white marble statues and temples that remain today, but the originals were not white. We know from ancient descriptions and a few pieces with surviving traces of paint that the stone buildings and sculptures of ancient Greece were brightly colored.

The striking colors of the past are not just a phenomenon of ancient Greece. At Stirling Castle, in Scotland, a recent restoration project has brought back the original rich yellow color of the walls of the medieval great hall, which was determined from traces of ochre mixed with the remains of the lime wash applied to the stone. You can see the striking contrast between the restored great hall in the background and the bare stone of the buildings in front.

Studying history requires an act of imagination. Just as we have to imagine ancient monuments are artifacts new and fresh, not as the worn-out relics we see today, we also have to imagine peoples of the past as vibrant, complicated, living societies, not the stilted, dry facts of textbooks. Fiction has a great value to the student of history, as it helps us imagine ourselves into the lives of people different from ourselves. Our history is always somebody else’s daily life.

The library attached to al-Qarawiyyin mosque and university (alternate western spellings include Al Karaouin and Al Quaraouiyine, among others) in Fez, Morocco, is not just the oldest active library in the world, it’s also exceptionally beautiful. 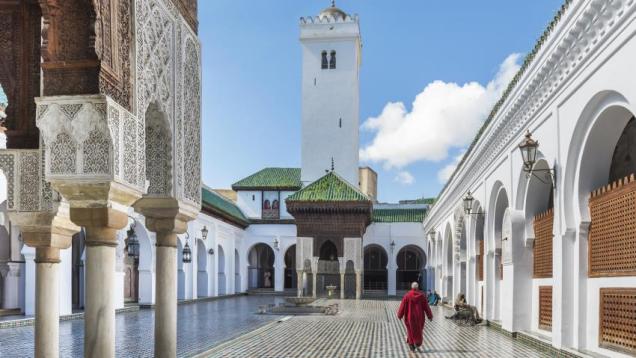 Al-Qarawiyyin was founded in 859 by Fatima Al Fihri. The architecture of the university reflects various past styles and ruling dynasties. The decorated interiors include calligraphic designs on the walls, ceramic patterns on the floors, and wooden carvings on the ceilings. 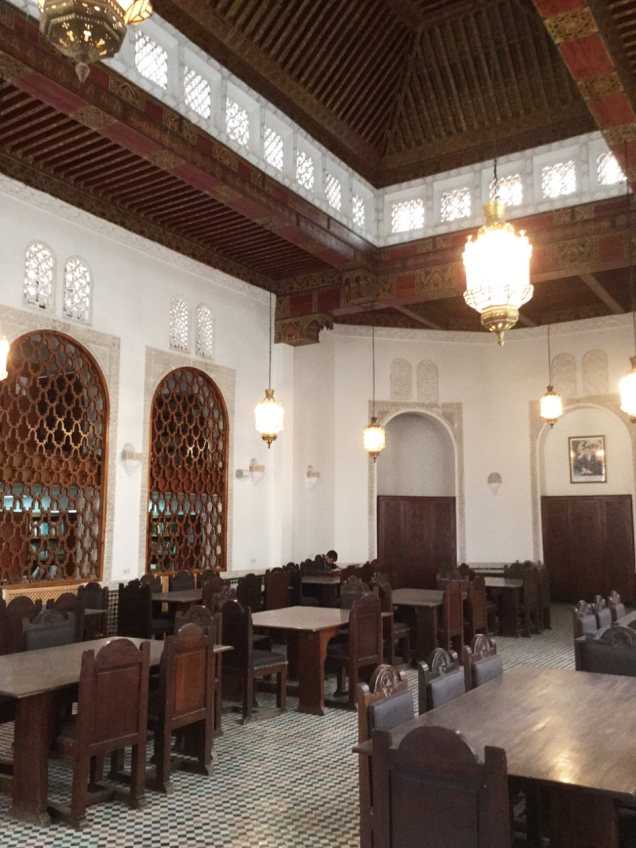 From 2012 to 2016, the library was completely renovated. The restoration was lead by architect Aziza Chaouni. She describes the starting point for her project at TED.com:

“When I first visited, I was shocked at the state of the place.

“In rooms containing precious manuscripts dating back to the 7th century, the temperature and moisture were uncontrolled, and there were cracks in the ceiling. […]

“Throughout the years, the library underwent many rehabilitations, but it still suffered from major structural problems, a lack of insulation, and infrastructural deficiencies like a blocked drainage system, broken tiles, cracked wood beams, exposed electric wires, and so on.” 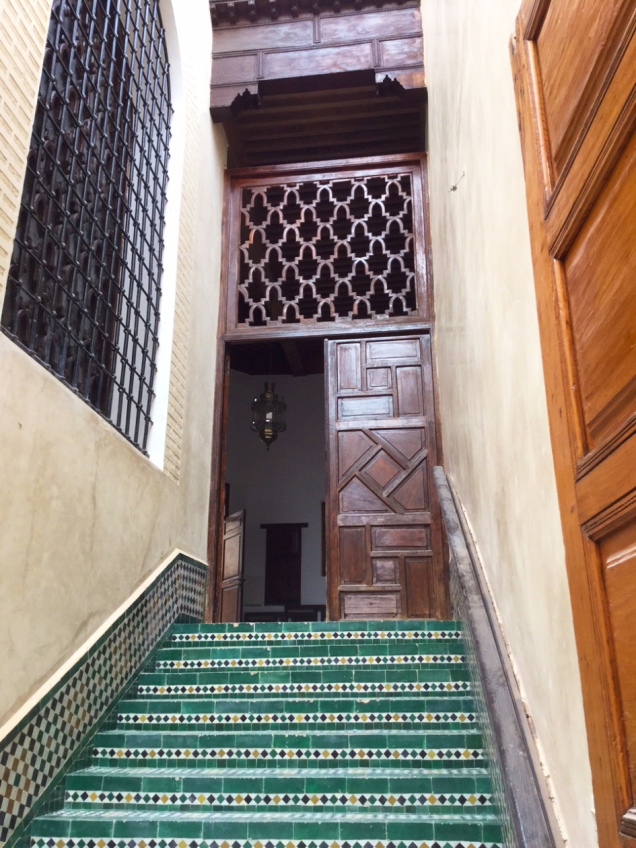 One of Chaouni’s leading principles was respect to its authenticity. Her restoration team preserved and salvaged what they could, but when it wasn’t possible, features and details were created from scratch. This included using local materials and construction systems, like furniture by local craftsmen who used native wood. Says Chaouni:

“There has to be a fine balance between keeping the original spaces, addressing the needs of current users, including students, researchers and visitors, and integrating new sustainable technologies — solar panels, water collection for garden irrigation, and so on.” 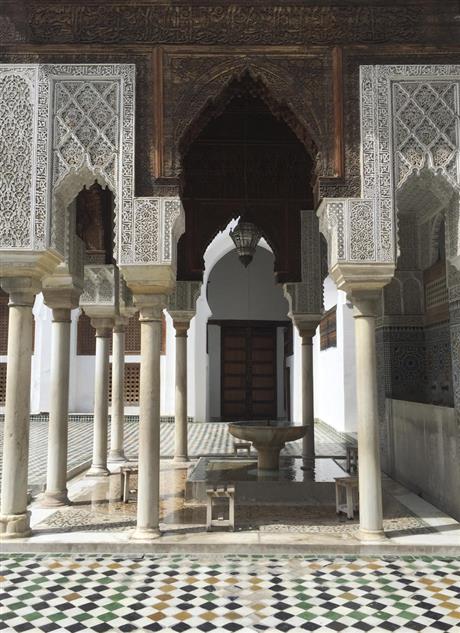 Currently a part of Morocco’s state university system, the library is now open to the public in addition to historians and students.

(Incidentally, the university’s famous alumni include the 16th-century Andalusian adventurer known as Leo Africanus, whose book Description of Africa was considered the most authoritative source for northern Africa until the beginning of European exploration and expansion in the African continent.)

More photos at The New Arab, TED.com, The Big Story, Tor.com and BookRiot.

After the invention of the printing press, old handwritten books and documents were commonly recycled as reinforcements in new bookbindings made in the 15th through 18th centuries. Now, thanks to an x-ray technique developed in the Netherlands, these hidden manuscript fragments are readable without destroying the book they’re a part of.

It’s all possible with macro x-ray fluorescence spectrometry (MA-XRF), which allows even pages glued to each other to be read. Dr. Erik Kwakkel at Leiden University, one of the academics behind the Hidden Library project attempting to uncover more of these fragments, has both been interviewed and written about the process. 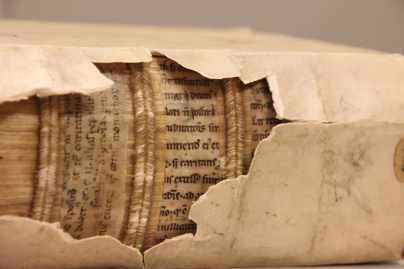 Dr. Kwakkel describes the importance of this discovery for The Observer like this:

He blogs about his projects and findings at Tumblr and at medievalbooks; see the latter e.g. for the exclusive behind-the-scenes post on the Hidden Library project.

Now I’m hoping we will eventually find a wealth of medieval texts in bookbindings. It’s really fascinating what we can discover with modern technology! 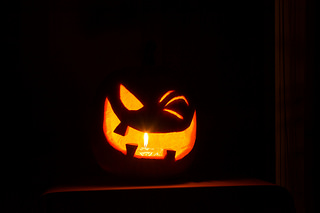 Halloween will soon be upon us. The origins of this holiday are obscure. It is often connected with the Gaelic festival of Samhain, which marked the end of the harvest and the beginning of winter, but Halloween, at least as popularly celebrated today in the US and some other countries, has wider connections. It is an example of a type of holiday found in many cultures: the “feast of fools.”

END_OF_DOCUMENT_TOKEN_TO_BE_REPLACED

This is a very, very, very basic introduction to the question of race from a historical perspective. If you’ve studied any world history, human genetics, or even just had your eyes open in the past decade, there’s probably nothing here you don’t already know. Everything I have to say has been said before, so why say it again? I have two reasons.

First, there are some more obscure and complicated things I want to talk about concerning race and history and it would be useful to have some basic points covered for future reference.

Second, there are some people who don’t know the basics of race, even some very intelligent people (even some Supreme Court justices), so it can’t hurt to say these things again.

No, really, hear me out on this.

END_OF_DOCUMENT_TOKEN_TO_BE_REPLACED

The majority of the stuff that needs to get done in an agrarian society is basic manual labor: primarily farm work, but also things like construction, building and road maintenance, mining, carrying, housework, etc. Any functioning pre-industrial society needs lots of workers to do all that work, but there are many different kinds of workers, some of which are not so familiar to us today. Some of these kinds of workers had it much better than others.

Here’s a list of possibilities, by no means exhaustive, arranged roughly in order from worst to best conditions.