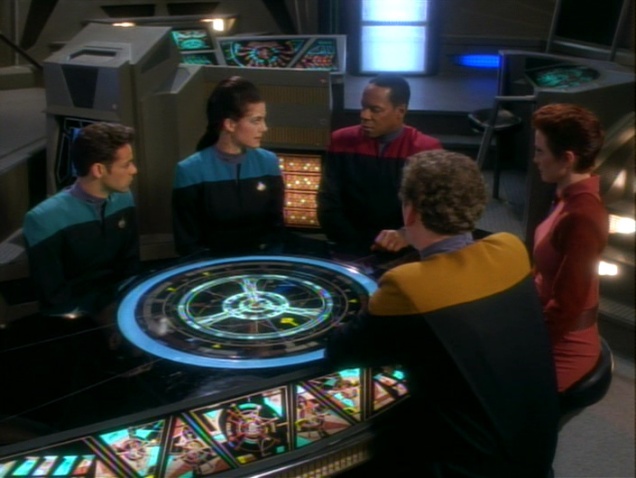 In all, not a great second season. The average rating is a meager 3.9, and there are no standout episodes like season 1’s “Duet.” You can tell that the actors were still growing into their roles, and the writers were still figuring out how to balance the optimistic, episodic tradition of Star Trek with the morally complicated ongoing stories they wanted to develop.

We have two episodes at the bottom of the barrel: “The Alternate” and “Paradise,” both rating only a 1. “The Alternate” promises some interesting development for Odo’s backstory when the crew finds remains of a similar being in ancient ruins, but only delivers a bog-standard fathers-and-sons-with-a-bad-relationship story. “Paradise” similarly promises a critique of the Federation’s techno-uptopia when Sisko and O’Brien crash on a planet where their technology doesn’t work, but delivers only a manipulative extremist who loves to give interminable monologues. These may be the most disappointing examples, but a lot of other episodes this season have interesting ideas in them that they can’t manage to do anything good with.

The best episode of the season is “The Wire,” at 6.5. In this episode, we learn more (but less than it seems) about the mysterious Cardassian tailor, Garak. While this episode has its weaknesses, it blossoms in the nuances of Andrew Robinson’s performance as Garak the erstwhile spy, by turns ingratiating, crabby, frightened, playful, and remorseful as he dangles hints of his past life just out of reach of the doctor who is trying to help him cope with a hidden addiction.

But if this season doesn’t have much to offer in the way of great episodes, it does lay a lot of the groundwork for the seasons to come. Important elements of the ongoing narrative are established or developed, like the Maquis resistance movement in the Badlands, the post-occupation chaos of Bajoran politics, the return to Classic Trek‘s “Mirror, Mirror” alternate universe, and the slowly growing menace of the Dominion in the gamma quadrant. Just as importantly, it sets up some of the important character and relationship growth that would become the heart of the series. Doctor Bashir and Chief O’Brien’s friendship first stretches its legs this season, as does Dax’s history with Commander Sisko. Recurring characters like Garak and Rom begin to come into their own.

Season 2 is not the best that Deep Space Nine has to offer, but it lays the foundation for the greatness that is to come.

Image: The operations crew at work, from “Playing God” via IMDb