Star Trek: Deep Space Nine ends on a high note. Here’s our ratings for the seventh and final season: 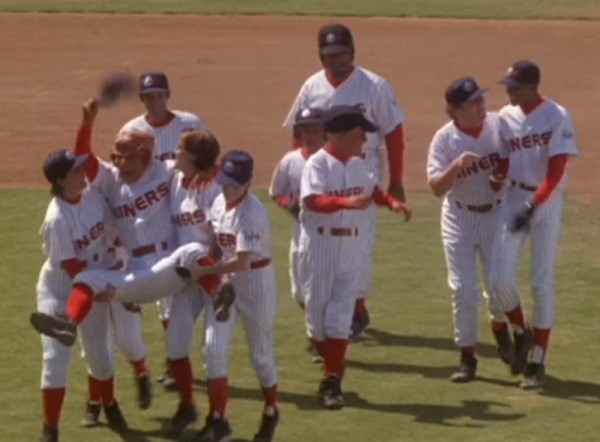 The final season comes with an average rating of 5.4, a solid way to end and the best season of the whole series. This average comes from a whole lot of episodes the decent-but-not-stellar range of 4-6. This season has only one real standout, but only a couple of clunkers, too. The final ten episodes of the season make up an arc covering the conclusion of the Dominion War, and these mostly hold up well (apart from “Penumbra” (4.5) and “”Til Death Do US Part” (3.5), which are a bit weaker as both mostly serve to set up plotlines for later episodes to pay off).

Nicole de Boer joins the cast this season, playing the next host to the symbiont Dax after Jadzia’s death. As the newest addition, she gets a fair number of episodes focused on her and her struggles to reconcile herself to her new memories without the years of preparation usually given to Trill host candidates. We’re sad to lose Terry Farrell and her swashbuckling smart-ass science officer Jadzia, but Ezri Dax is a worthy addition to the crew.

The weakest episode this season is “Covenant,” in which we discover Gul Dukat leading a cult of Bajoran pah wraith worshipers in an abandoned Cardassian station. Marc Alaimo is as brilliantly slimy as ever in his performance, but he can’t save an episode that feels both predictable and hollow. The pah wraiths had potential as an inscrutable foil to the equally inscrutable prophets, but the writers decided to turn them into standard-issue evil gods and never put much effort into thinking about their relationship to Bajor.

At the other end of the scale, though, we get the wonderfully warm and silly “Take Me out to the Holosuite,” a full 10, in which Sisko goes a bit off the rails trying to beat an old rival who challenged him at his favorite game: baseball. It’s charming to see how the crew rallies around Sisko, even as he gets too caught up in the competition, and utterly heartwarming to see him finally realize how his obsession with winning had blinded him to what made him love the game in the first place. This episode is a refreshing break from the ongoing Dominion War story, and the best realization I’ve seen of the old adage that “It’s not whether you win or lose that matters, but how you play the game.”

A couple of other episodes are worth noting. “It’s Only a Paper Moon,” at 8.5, deals with the consequences of Nog losing his leg a couple of episodes earlier in “The Siege of AR-558.” This episode rests on the performances of Aron Eisenberg as Nog and James Darren as the holographic singer Vic Fontaine. Both pull the episode off with subtlety and depth, and it is a tribute to the series that it trusted such a weighty episode to two side characters. Vic also features in “Bada-Bing Bada-Bang,” (8) a light-hearted holosuite casino caper that gives us a nice breather before the plunge into the final arc.

Thanks for being with us for our Deep Space Nine rewatch. Feel free to share your favorite episodes and memories!

Image: The Niners celebrate a manufactured triumph, from “Take Me out to the Holosuite” via IMDb