The world’s oldest yarn or cord has been found. The fragment was discovered at the prehistoric cave site Abri du Maras in the south of France. 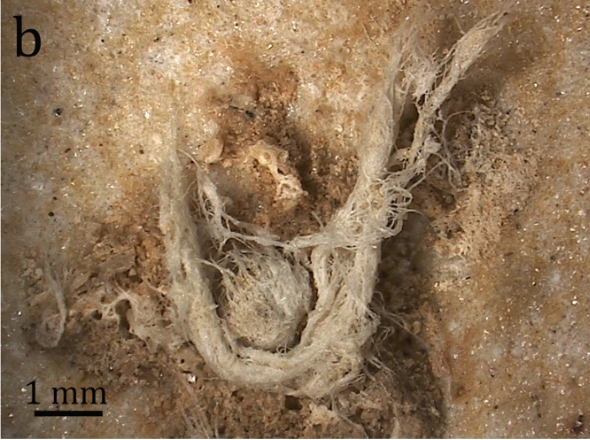 The 3-ply cord fragment was made from fibers by twisting, likely of inner conifer bark, and found on a stone tool. A number of artefacts at the same site also have plant / wood fibers adhering to their surfaces, but the remains are not extensive enough to classify as cords.

The researchers estimate the meaning of the find thus:

“While it is clear that the cord from Abri du Maras demonstrates Neanderthals’ ability to manufacture cordage, it hints at a much larger fibre technology. Once the production of a twisted, plied cord has been accomplished it is possible to manufacture bags, mats, nets, fabric, baskets, structures, snares, and even watercraft. […]

“Ropes and baskets are central to a large number of human activities. They facilitate the transport and storage of foodstuffs, aid in the design of complex tools (hafts, fishing, navigation) or objects (art, decoration). The technological and artistic applications of twisted fibre technologies are vast. Once adopted, fibre technology would have been indispensable and would have been a part of everyday life.”

Fascinating! Like the research team says, fiber making allows for an incredibly large variety of material culture, from utilitarian objects to clothing to decorative motifs. As a bit of a fiber nerd, it’s tantalizing to think that people were making yarn already 40,000 years ago.

4 thoughts on “New Find: Neanderthals Worked with Fibers to Make Yarn or Cord”