Season 3 of Castle keeps the mystery/comedy engine chugging along nicely with some fantastic episodes. Here’s how we rated them: 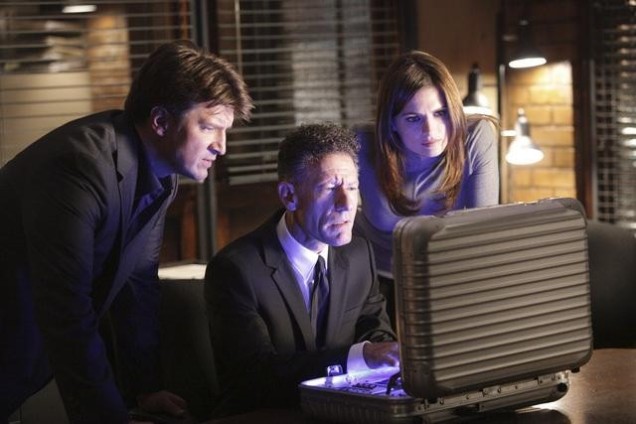 This season’s average rating is a pretty good 5.9, but that average is the product of a lot of really good episodes and a bunch of real stinkers.

The bottom of the barrel is the final episode of the season, “Knockout,” which gets a measly 0.5. This episode and the earlier “Knockdown” (1) are both part of the interminable story arc about Beckett’s mother’s murder and the shadowy conspiracy surrounding it. Another interminable story arc is introduced this season with “3xk” (2), in which Castle picks up his very own obsessed serial killer, which seems to be an accessory that every tv detective must have, no matter how boring or implausible. These plus the tedious terrorism-themed two-parter “Setup” (1.5) and “Countdown” (1) drag this season down by a lot. We come to Castle for the quirky murder-of-the-week stories and the fun interactions among the characters. Serious Drama just gets in the way of the fun.

But there is definitely fun to be had this season! There are two episodes that we rated a full 10; “Close Encounters of the Murderous Kind,” a fun X-Files pastiche that pits Castle and Beckett against space scientists, men in black, and (not quite) aliens. After that comes “Last Call,” about a murder connected to the discovery of a secret Prohibition-era stash of fine whiskey. Both of these episodes offer good mysteries for the team to solve while leaving lots of room for the usual antics. Beyond those two, there are plenty of episodes in the 8-9.5 range as well.

This season also solidifies a trend, emerging in the first two, in which the week’s case takes the team deep into some particular subculture—be it steampunk, stage magic, or pizza—before finding a familiar human story at the center of it. These episodes give Castle and the boys (Ryan and Esposito) lots of room for goofy side adventures while Beckett rolls her eyes and gets on with the business of crime solving. And what else can you ask for from Castle?

Image: Castle and Beckett consult with a man in black, from “Close Encounters of the Murderous Kind” via IMDb