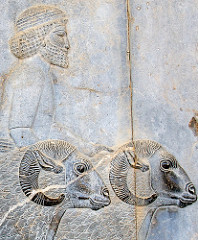 Administrative records from the Persian Empire preserve some evidence of a lady of the royal court gathering resources, probably in preparation for a feast:

A message to Yamaksheda, the wine carrier, from Pharnaces: Issue 200 marrish [about 2,000 liters] of wine to Princess Artystone. By the king’s order.

A message to Harriena, the herdsman, from Pharnaces: King Darius commanded me in these words: “Issue 100 sheep from my estate to my daughter, Princess Artystone.”

Now Pharnaces says: “As the king commanded me, I command you: Issue 100 sheep to Princess Artystone as the king ordered.”

We can learn some interesting things from this evidence.

For one thing, it gives us a sense of how the Persian imperial bureaucracy worked. There were higher officials like Pharnaces who were responsible for overseeing the distribution of goods, scribes like Ansukka, messengers like Mazara, and lower officials in charge of particular categories of goods. Messages like these directed those who were lower down in the hierarchy to issue certain quantities of goods while at the same time keeping a record of what had been issued and where it came from.

Secondly, this is evidence for the scale on which elite Persian women could command economic resources. 2,000 liters of wine and 100 sheep cost no small amount of labor to produce. Artystone could, with her father’s consent, draw on the fruits of all that labor.

And finally: it looks like Artystone really know how to throw a party.

One thought on “Wine and Sheep for a Princess”