Since 1991, in Gentilly, Quebec, the residents have held an annual giant pumpkin competition—and boat race!—called Potirothon. The name is a portmanteau of potiron and marathon.

After weighing the entrants, some of the giant pumpkins are carved into 1-seater canoes and raced on the Bécancour River. 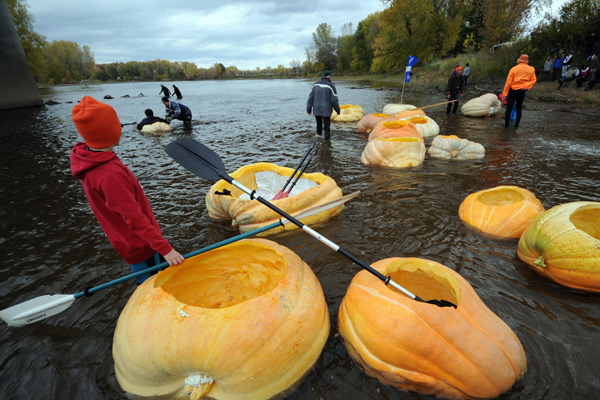 The Potirothon race is so awesome! Although pumpkins aren’t new to me anymore, the giant variety is. This is also the first I hear of carving the giant kind. My mind immediately went to an alternate Shire, or maybe another secondary world where humanoids of a smaller stature might want to use giant hollowed-out gourds / fruit / plants as transport. Or not even necessarily humanoids; intelligent beings of any shape or size.

Image via kanbukai at Tumblr.

P.S. Scandinavia and the World made a comic about Potirothon!