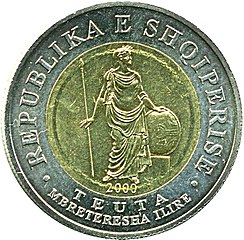 Let’s talk about pirates. (No, not talk like pirates—that comes later this week.) In popular culture, we typically think of pirates in the waters of the Caribbean in the 17th and 18th centuries, but the practice of cruising the seaways and taking plunder by force is an ancient and worldwide custom. For some people, raiding passing ships was an accepted and ordinary way of life. Among those people were the ancient Illyrians.

The Illyrians lived along the mountainous western coast of the Balkan peninsula, in the vicinity of modern-day Albania, Montenegro, Croatia, and Bosnia-Herzegovina. Much like the Greeks who lived to their south, they shared a common culture and language, but were not politically unified. Small-scale warfare and raiding between Illyrian tribes was a normal part of life, but Illyrians also frequently went beyond their borders, raiding nearby cities and sailing out into the sea in small, fast boats to attack passing ships.

The Illyrians were well placed to make a profit on plundering shipping. From their position along the Adriatic coast, they could easily strike at trade routes through the Adriatic, and more organized raiding parties could hit the major routes that between Greece and Italy, connecting the eastern and western Mediterranean.

For much of the ancient period, Illyrian piracy was a present but manageable danger in the Mediterranean, more an occasional nuisance than a real threat to trade, but in times of turmoil, when the more organized states of the region were less able to deter attacks, Illyrian tribes could become more ambitious. One tribe that took advantage of such chaotic circumstances was the Ardiaei, who aggressively pursued not only raiding at sea but conquests on land as well under their queen Teuta (ruled 231-227 BCE).

At this time, the major powers of the both the eastern and western Mediterranean were busy with their own problems. The Greek world was consumed with wars between the kingdom of Macedonia and several alliances of Greek cities. Tensions were rising between Rome and Carthage as the two major powers in the west slid towards a second war. Teuta’s husband and predecessor as ruler, Agron, had gotten his people involved in Macedonia’s wars and expanded his tribe’s control over large areas of Illyria. Teuta carried on with an aggressive policy that combined piratical raids on nearby shipping lanes with territorial expansion along the Adriatic coast.

As Teuta’s people began to threaten Roman merchants, the Romans decided to intervene and sent a pair of ambassadors to demand reparations and an end to the attacks. Teuta dismissed the ambassadors’ complaints saying:

…that she would try to take care that no injustice should be done to the Romans by the Illyrian nation, but that it was not the custom for Illyrian monarchs to prevent their people from making their living on the sea.

Teuta’s response was somewhat disingenuous, given that she had directed and made use of seaborne raids for her own purposes, but it also shows how the Illyrians thought about their piratical activities.

Teuta was making a distinction between piracy and war. War, from her point of view, was a collective effort by a whole nation, directed by its leaders against a defined enemy. Illyria was not at war with Rome, and she promised the Roman emissaries that she and her forces had no intention of attacking Roman territory. Her wars were in Greece.

Piracy was something different. It was not a way of making war but a way of making a living, something done by private individuals. She, even as queen, had no right to interfere in her people’s piracy, any more than she could tell farmers not to farm or hunters not to hunt. The Illyrians regarded passing ships as a kind of natural resource. Plundering those ships was just a way of harvesting that resource, like pulling fish from the sea in nets. It was not an attack upon a particular people or nation. Anyone who sailed the seas was accepting the risk of being plundered and had little right to complain about it.

As far as Teuta was concerned, the Romans had no business complaining to her: she wasn’t at war with them, and her people had a natural right to plunder any ship that passed by.

Of course, the Romans didn’t see it like that. From the point of view of Roman merchants, it didn’t much matter whether the people raiding their ships and stealing their goods were agents of a monarch or private entrepreneurs. In response to Teuta’s seemingly dismissive answer, Rome launched an attack on Illyria. After brief fighting, Teuta’s forces were beaten and she, though allowed to remain in power, was stripped of most of her territory and forced to pay tribute to Rome.

Queen Teuta’s response to the Romans offers us an alternative view to the dominant Greco-Roman narrative of Mediterranean history. Even though her answer comes to us filtered through the perspective of a Greek historian who casts the Romans as the heroes of the story, we can still understand the logic of her point of view. To her, the difference between war and piracy mattered; as queen, she had the right to control one activity, but not the other.

Image: Modern Albanian coin with an artist’s depiction of Teuta, photograph by Numista via Wikimedia