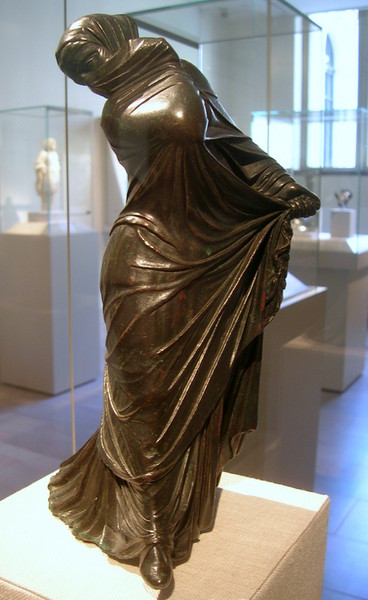 We often tell scary stories not just to evoke screams and chills but with a message. The monsters of our creepy tales reflect our larger fears, but sometimes the point of the story is that the most frightening things are done by our fellow human beings, not by spooks or spectres. Such is the case with a ghost story told by Herodotus.

The source of this tale was a meeting of representatives from various Greek cities convened by the Spartans in the late 500s BCE to consider going to war against Athens. Athens had been in a state of political turmoil and the Spartans proposed invading the city and imposing a tyrant to restore order and stability.

The representatives of Corinth spoke out strongly against the proposal. Corinth had been ruled by tyrants for three generations, and Corinthians knew better than anyone what tyrants were like. Socles of Corinth told the story of Periander, the Corinthian tyrant. Periander had killed his own wife, Melissa. He then tried to consult her spirit when he mislaid a treasure that a friend had left with him:

He sent messengers to the oracle of the dead at the River Acheron in Thesprotia to inquire about his friend’s deposit, but when the spirit of Melissa appeared, she would not indicate, by speech or action, where the deposit lay, for she was naked and shivering. The clothes that had been buried with her were of no use to her since they had not been burned. As proof that what she said was true, she added that Periander had put his loaves in a cold oven.

When this message was reported to Periander, he knew it to be the truth, for he had had intercourse with Melissa when she was dead. He at once issued a proclamation that all the women of Corinth should gather at the temple of Hera. They came out dressed in their best as if for a festival, but Periander had his guards fall upon them and strip them all naked, ladies and servants alike. The clothes were heaped up in a ditch and Periander, with a prayer to Melissa, burned them all.

After this he sent a second time to the oracle, and the spirit of Melissa pointed out where the deposit lay.

Some things are more frightening than ghosts.

Image: Bronze statuette of a veiled and masked dancer, from the collections of The Metropolitan Museum of Art, bequest of Walter C. Baker in 1971, accession number 1972.118.95, by Eppu Jensen (Greek; 3rd-2nd century BCE)

Story Time is an occasional feature all about stories and story-telling. Whether it’s on the page or on the screen, this is about how stories work and what makes us love the ones we love.