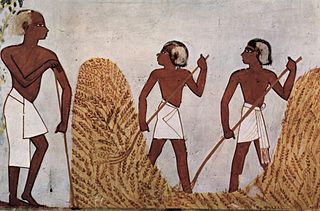 Being in middle management sucks. You’re stuck between unreasonable bosses and uncooperative workers. If you’ve ever been in that position, you might have some sympathy with Panakestor, the overseer of a farm in Ptolemaic Egypt some of whose daily correspondence has been preserved on papyrus in the desert climate.

Between 323 and 30 BCE, Egypt was ruled by the Ptolemies, descendants of one of Alexander the Great’s generals. Ruling from Alexandria on the coast, the Greek-speaking Ptolemies depended on a large class of local administrators and subordinates to deal with the Egyptian-speaking population. Some of these subordinates were immigrants from Greece or other regions around the Aegean Sea; others were native Egyptians who saw opportunities working for the new regime. Panakestor was a Carian, from southwestern Anatolia (modern-day Turkey). He oversaw an estate near a town called Philadelphia belonging to Apollonius, a big shot in Alexandria who owned many such estates around Egypt.

The original agreement between Apollonius and the Egyptian farmers who worked his land was simple: at harvest time, they would hand over one third of their crop as rent and keep two thirds for themselves. In 257, however, Apollonius decided he wanted to change the system, even though it was very late in the season and almost harvest time anyway. Now he wanted the farmers to estimate the value of their crop at the beginning of the growing season and pay a portion of that as rent up front. This new arrangement would be good for Apollonius as he could guarantee his income, but if the crops failed the whole risk would be on the farmers.

Apollonius sent out a message ordering Panakestor to put the new system in place. Panakestor did his best, but soon wrote back explaining that things were not going well. Apollonius then sent out an impatient second memo:

[To Panakestor] from Apollonius. I was astounded at your negligence that you have written nothing, either about the estimation or about the harvest of the grain. Write to me now how each matter stands.

Panakestor wrote back giving fuller details of the problem. His letter also survives:

[From Panakestor] to Apollonios. I received your letter on 14th of Pachons [6th of July] from Zoilos, in which you write that you are astonished that I have sent you nothing concerning the estimation or the harvest of the crop. I happened to be present in Philadelphia on the 16th of Phamenoth [9th of May] and wrote at once to Zoilos and Zopyrion and to the royal scribes to join me and help manage the operation. Now, Zoilos happened to be making the inspection rounds with Telestes; he was therefore unavailable, but the royal scribes and Paues, Zopyrion’s assistant, came twelve days later. Together we went out into the fields and spent five days measuring the land by farmer and by crop.

We completed this, sent for the farmers, and announced your order to them. We then thought it right to call on them to make an estimation, just as you directed, or to work with us and draw up plans for an alternative. They said that they would inform us when they had considered the matter. Four days later they sat down in the temple and said they would not make an estimation, justly or unjustly, but would rather abandon the crop, for there was already an agreement that they should give you a third of the produce. Damis and I said many things to them, but we accomplished nothing.

We learn a lot of interesting things from these letters. For one, we get a glimpse of just how much middle management there was in between Apollonius and the farmers. All of the other administrators that Panakestor mentions—people like Zoilos, Paues, and Damis—were involved in carrying messages, surveying fields, and trying to negotiate with the farmers. Without that class of intermediaries and all the work they did, Ptolemaic rule would have been impossible. Much of this administrative class must have been bilingual as well.

It is also important to note that power has its limits. Despite the high level of organization and management on display here, when the Egyptian farmers felt like they were being taken advantage of, they went on strike and there was little Apollonius could do about it. No quantity of angry memos from Alexandria was going to get that crop harvested.

The place where the farmers made their stand is also noteworthy. The priests of local temples had long played an important role in the administration of the Egyptian kingdom. Since the striking farmers took up residence in the temple to make their protest, it would seem they had at least the tacit support of the local priest. Even after several generations of Ptolemaic rule, native Egyptian institutions could still be looked to to support resistance. Eventually, the Ptolemaic kings figured out that if they wanted the country to run smoothly, they needed to get the Egyptian priesthood and Greek courtiers like Apollonius all on the same side.

Poor Panakestor was caught in the middle of all these forces. Perhaps it’s no surprise that soon after these events he either chose to move on or got fired. Both the letters quoted above are preserved for us in Panakestor’s correspondence with Zenon, the new administrator who a month later was coming in to take over his job. Panakestor sent him copies of these letters to bring him up to speed on local conditions. He also included some advice on dealing with a demanding boss:

When you meet with Apollonius, remind him about the notes he gave you in Memphis and tell him to give you authority over the business. Be sure to remind him that you will follow orders from the king exactly as they are written.

Sometimes you need to remind the boss that he has a boss, too.