Here’s a look at how we made yesterday’s The Return of the King. 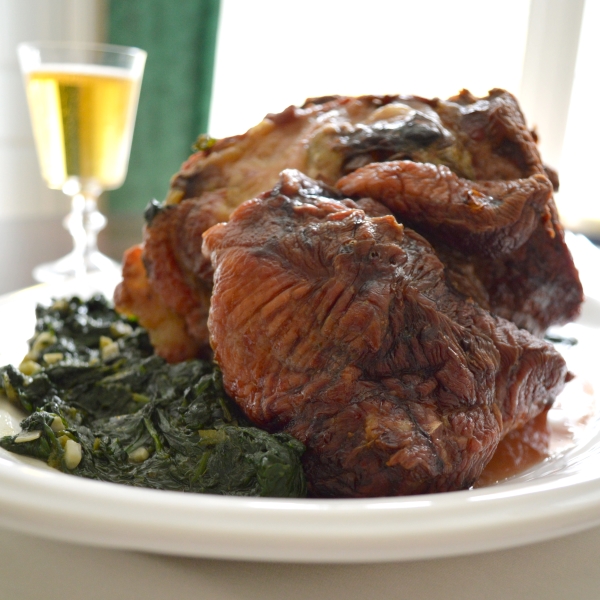 Since we really only see Gondor in a time of war and Tolkien gives us very little detail about what daily life was like after the defeat of Sauron, it takes some imagination to come up with a proper meal for such an occasion. In creating this month’s menu, I had a specific idea in mind: a feast that would represent all the people of Gondor. Aragorn’s coronation meant a new beginning for a kingdom that had been in a long decline. It touched all of Gondor’s people and it made sense that they would all contribute something to the table.

From the fishing folk of Ethir Anduin, we get a seafood soup. This recipe uses a variety of different seafoods combined with carrots and onions. It is, at heart, food for a hardworking family making a living from the sea and small coastal gardens, but the addition of cream and saffron makes it richer, sweeter, and more luxuriant. (5.1)

From the small farmers and herders of the hill country, we have a haunch of roast pork. To reflect the southern climes of Gondor, the pork is stuffed with herbs, olives and dates. This, too, is simple food, but presented in royal style.

From the fields and gardens of Pelennor, we get sauteed spinach, flavored with garlic and ginger. This recipe is inspired by a medieval dish from the middle east which seems appropriate for the Mediterranean-ish setting of Gondor.

Finally, from the sophisticated city-dwellers of Minas Tirith itself, we end with an artful set of almond pastries representing the white tree and seven stars of Gondor.

This recipe is very flexible and can take just about whatever fresh seafood you can find. Our version is made with cod, clam, and shrimp, but try haddock, hake, scallops, and squid, if you like, for variety. The bay leaves and saffron give it a light, sweet flavor to balance the richness of the cream. 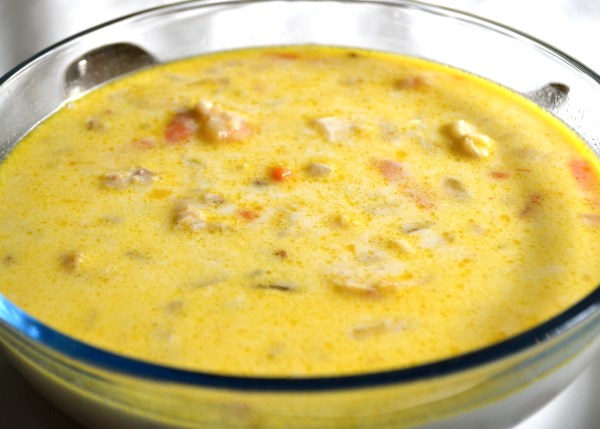 Roast pork with olives and dates

I like a mix of flavorful olives, like kalamata, for this stuffing, but it will work with whatever you have. The combination of the salty olives and the sweet dates gives the pork a really great flavor. Reserve the liquid that comes out while cooking, skim it, and thicken it for gravy if you like.

1 pound may seem like a lot of spinach, but if you’re cooking for more than one you’ll be glad you started big. If you’ve cooked spinach, you know that it cooks down a lot, so don’t worry if you can’t fit it all into the pan at first. 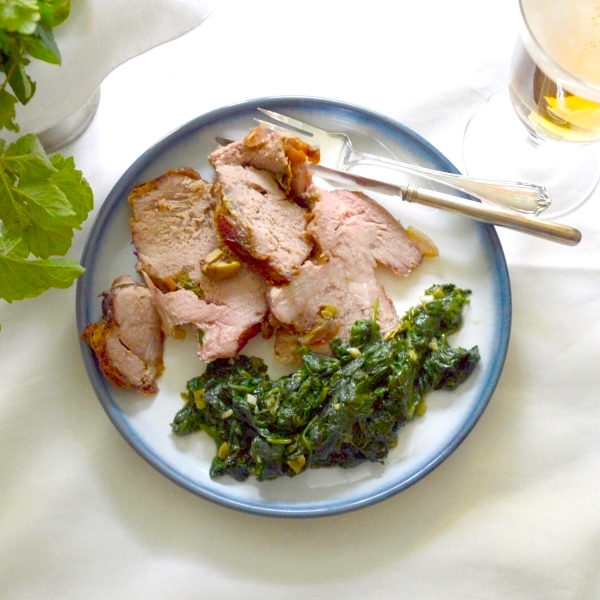 You can make your own puff pastry dough if you want, but it’s hard work. I recommend buying the ready-made stuff, but suit yourself. You can substitute marzipan for the almond paste, but it may not stand up as well to baking. 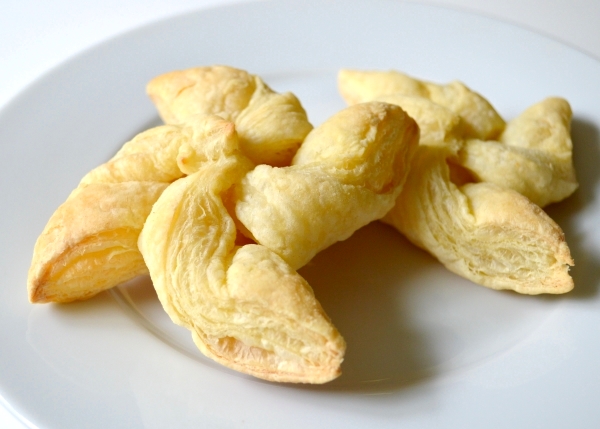 So, as Erik said, we imagined a rich Gondorian sit-in meal in stable circumstances, not war-time munchies for soldiers and rangers on duty in Ithilien and elsewhere. We figured that, since Gondor was recuperating from a war, making new furniture, dishes, cutlery, and other accessories wouldn’t be a great priority for Aragorn’s coronation. So, we’re using what Denethor had as a model for our dinner.

Tolkien scatters details of Gondorian meals and homes here and there in The Return of the King (books five and six of the trilogy). Probably the most complete and useful description of interiors within the city comes from the description of the small house given for Gandalf and Pippin’s use before the siege started:

“Within [the house], upon the first floor above the street, up a wide carven stair, […] a fair room, light and airy, with goodly hangings of dull gold sheen unfigured. It was sparsly furnished, having but a small table, two chairs and a bench; but at either side there were curtained alcoves and well-clad beds within with vessels and basins for washing. There were three high narrow windows that looked northward […] Pippin had to climb on the bench to look out over the deep stone sill.” (5.1)

Denethor’s hall contrasts starkly with this house. It had a “tall door of polished metal,” plus pillars of black marble with carved capitals and ceiling with gilt vaulting. The hall didn’t have textiles: “[n]o hangings or storied webs, nor any things of woven stuff or of wood, were to be seen in that long solemn hall.” (5.1)

We can’t duplicate the extensive stonework that features in these extracts, so we concentrated on color. Since Denethor’s hall is mostly white and black, we decided with a contrast of white and dark (table) for the shoot. I chose primarily white dishware or, if I couldn’t find pure white dishes, ones with only hints of blue or pale green. Most of the color comes from the food. 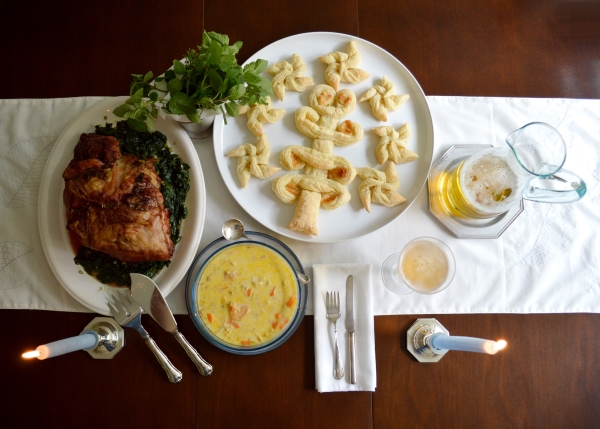 Otherwise, I planned our table setting to—hopefully—strike a balance between opulence (as befits a meal for the ruler of one of the richest realms in the story) and austerity (which was important for Denethor). The shapes of the dishware I selected are simple, with no patterns or surface decorations.

When Gandalf and Pippin first come to talk to him, Denethor calls for “wine and food and seats for our guests”. We hear explicitly of “a salver with a silver flagon and cups, and white cakes” (5.1). It sounds odd that they were to eat the cakes without plates or napkins. For our table, I therefore added creature comforts: a white napkin and a white, shimmery table runner with grey embroidered leaves. I translated the salver mentioned in this extract into a small pewter plate underneath the glass pitcher. Silver cutlery and silvery candlesticks introduce a touch of luxury. A pewter cup hold mint sprigs for additional color and flavoring.

On our table, a glass pitcher stands in for a flagon. We don’t have anything that could stand in for wine cups, but the thriftstore wine glasses that I found a few years ago are quite elegant and reminiscent of 1800s wine glasses in our world, so I used them. Their shape is slightly angular, which I thought fits Denethor’s personality—no soft curves for him.

If I were to do this dinner setup again, I might add more layers—more textiles and more dishes, like we did for the Rohan dinner—for a little more opulence. I think the mostly white color scheme worked well, though. I’d also try to diffuse the light more evenly; it was a challenge to edit this round of photos.