In two weeks, Miss Fisher and the Crypt of Tears opens! Well, at least with certain values of open: It’s released on February 27, 2020, in Australia. Here’s the trailer:

Looks very much like an upgraded version of the tv series, so it should be fun. (Apart from the bad trigger discipline, but I fully admit I’m very sensitive about that.)

I haven’t yet seen confirmed dates for Europe or North America; one site gave March for U.S. and a tv channel March 23 for their streaming date; no sources have confirmed theatrical release details, though. If anyone has seen firm dates, please let us know!

We’ve now rewatched and rated season 3 of Miss Fisher’s Murder Mysteries, and it is over too soon! Season 3 is several episodes shorter than the first two seasons (on 8 episodes, compared with 13). The quality of the episodes also suffers a little in the third season, but it was still a delight to watch. 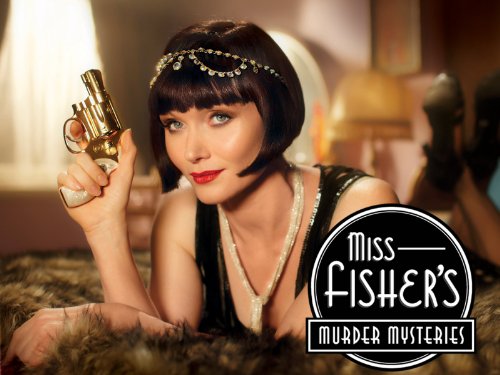 The average for this season is 6.3, a bit of a step down from the previous season’s 7.1, but still perfectly respectable. Most of the season’s episodes are at least average and there’s a good bunch of 7s.

Our diminished enjoyment of this season can be largely put down to one cause: Phryne’s father, who pops up in several episodes and dominates the season’s low point, “Death at the Grand,” which we rated only a 4. He is a selfish, irresponsible man who aggravates Phryne and us. Fiction, of course, is not real life; sometimes terrible people make for great characters, but this is not one of them. All Phryne’s father does for us is to put a damper on the wit, sparkle, and verve that we love this series for.

To balance that, the high point of the season is “Murder and the Maiden,” an interesting and complicated mystery surrounding the death of a pilot who turns out to have been leading a double life.

And now we have a Miss Fisher movie to look forward to! This is a series that definitely deserves a good send-off, so we can’t wait.

Every Cloud Productions has launched a Kickstarter campaign to bring Miss Fisher & the Crypt of Tears onto the big screen worldwide.

“Every Cloud Productions is proposing to produce a feature film building on the successful Miss Fisher Murder Mysteries television series, and is undertaking this Kickstarter campaign to raise a portion of the production budget for the film.

“Set in the late 1920’s, Miss Fisher & the Crypt of Tears honors the heightened exoticisms of the murder mystery genre as the Honourable Miss Phryne Fisher, lady detective, escapes the small screen and takes off on a global adventure – via romantic wayside stops in the Far East, glamorous sojourns in the mansions of London, and a battle to survive the rolling sands of the Arabian Desert long enough to find the missing treasure, solve numerous murders and break all aviation records as she wings her way home again!”

The stand-alone script is currently being finalized, with the same team who created the series set to work on the film. Production is preliminarily planned to start in mid-2018. The feature would be set for release in Australia in mid-2019, with other countries to follow as soon as possible.

And the campaign is going splendidly! Fans were so eager to see Phryne and Jack in the theaters that it reached its first goal in one day.

At this writing, two three stretch goals and more rewards have been added. It looks like the project will reach the latest stretch goal within days, too.

The average for this season is 7.1, which is pretty good and not too far off from season 1’s average of 7.4. There are some lackluster episodes balanced by a number of gems.

The lowest-rated episode is a tie between “Murder Most Scandalous,” in which our hero Phryne Fisher goes undercover at a gentlemen’s club, and “The Blood of Juana the Mad,” about the murder of a university professor which involves a secret hidden in a sixteenth-century manuscript. Both episodes have their good points, but they don’t hold together very well.

At the top of the chart this season we have “Framed for Murder,” a spirited romp surrounding a murder on a movie set which lovingly recreates both the glamour and the spit-and-bailing-wire spirit of early movie-making. When the movie’s director is killed, Phryne gets to step in and take over the job, complete with jodhpurs.

Our rewatching-and-rating project has moved on to Miss Fisher’s Murder Mysteries, a delightful Australian series about a flamboyant flapper detective from the roaring 1920s, based on the novels by Kerry Greenwood. We don’t get a lot of Australian tv on this side of the world, but Miss Fisher is a treat from beginning to end. The first season is the best-rating season of anything we’ve watched so far. (For an explanation of our rating system, see here.)

Here’s our ratings for the first season’s episodes:

There are so many things to love about this series, from the wonderful characters to complicated mysteries. It explores both the Jazz-Age high life of the post-WWI bright young things and the workaday world of early-twentieth-century Melbournites. The main character, sparklingly played by Essie Davis, is always entertaining and she’s surrounded by an excellent supporting cast.

The average rating for this season is 7.4, which is a fantastic way to start. Most of this season’s episodes are good to excellent, with only a couple that come in a little underwhelming. The lowest of the season is the final episode, “King Memses’ Curse,” which is just a rather uninspired serial killer story. The entertainment industry loves its serial killers—especially, like this one, those that have an irrational obsession with the hero—but we’re just tired of the trope.

Fortunately, we have a couple of 9s tied for best episode to balance out the lackluster ones. The first episode, “Cocaine Blues,” starts things off with a bang, sending Miss Fisher into a murder investigation that leads to cocaine smuggling and a back-alley abortionist. Many of our favorite characters get introduced here: Miss Fisher’s timid but trusty companion Dot, the acerbic Doctor Mac, the sweet-natured Constable Collins, and Inspector Jack Robinson, who, though often aggravated by Miss Fisher’s insistence on thrusting herself into his investigations, also learns to value her input. The other 9 is “Death by Miss Adventure,” about a mysterious death in a factory which reveals many layers of intrigue and skullduggery. This episode gives Dot a chance to go undercover and also delves in Doctor Mac’s life in more detail.

You could hardly ask for a better first season!