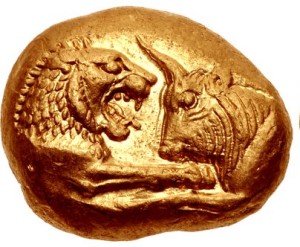 If you’ve played a role-playing game, whether tabletop or computer, you’ve probably seen your hero complete a quest and get rewarded with a handful of coins (be they copper, silver, gold, or something more exotic). It’s a perfectly familiar experience that makes sense from a modern point of view: do a job, get money. There’s a historical connection, though, between mercenaries (which, when you come right down to it, is what a lot of RPG characters are) and coins.

Various objects have been used for trade in cultures all around the world, from cowrie shells to cacao beans, but the earliest coins as we traditionally know them—lumps of precious metal in standardized weights stamped with symbols—were produced in the kingdom of Lydia, in the mountains of western Anatolia (modern-day Turkey), in the seventh century BCE. Lydia had two good reasons for producing coins. One: they had an abundance of precious metal wealth in the form of electrum (a natural alloy of gold and silver) collected from the rivers that ran through Lydia’s mountainous land. Two: they needed soldiers.

For a period in the seventh and sixth centuries, Lydia was one of four major states that dominated the region we know today as the Middle East. The others were Egypt, Babylon, and Media. These four states competed for dominance in the region and needed to maintain strong military forces. Many of them looked to the smaller, poorer, less well organized societies on their borders as recruiting grounds for mercenary soldiers.

There are certain advantages to hiring mercenaries rather than recruiting your own people to fight your wars. Hiring mercenaries lets you put troops on the front lines quickly while keeping your own peasants in the fields producing food. The loyalty of mercenaries is not constrained by local ties or obligations. They can be tasked with dangerous or onerous tasks like digging siege tunnels or standing guard duty that might prompt unrest if you asked a levy of your own people to do them. Finally, if you send a company of mercenaries into battle and a lot of them die, you don’t have to deal with their angry families back home.

Mercenaries are not integrated into the economies in which they serve. Pre-modern societies were held together by bonds of mutual obligation established over years and generations of living and working together. Landowners had an obligation to protect the tenant farmers who worked for them, and tenant farmers in return had an obligation to work the land. Small farmers living together in a village owed one another mutual support. Crafters and other specialists such as priests, doctors, entertainers, scribes, and others who offered services for pay still did so in the context of long-standing relationships. When people like these were called upon to form an army, they fought in defense of their homes and families, but also within existing relationships of obligation and patronage. Even if there was no formal compensation for militia service, a tenant farmer or a blacksmith who went off to war could expect that some of the benefits of victory would filter down to them through these relationships.

If you want mercenaries to fight for you, though, you have to pay them. You can offer food, clothing, and other goods like that, but a person only needs so many shirts, and extra food is hard to lug around from camp to camp. You can promise them land once their service is done, but that can cause conflicts with your own people who may not want a bunch of foreigners settling nearby. Also, having a lot of experienced fighters with nothing to do hanging around your kingdom can lead to trouble—once they’ve finished fighting your wars, you generally want them to go away again. For similar reasons, you don’t want your mercenaries to feel as though they’re being cheated or paid unequally, so whatever you pay them should be something whose value is easy to measure.

So the ideal characteristics of mercenary pay are:

For the kings of Lydia, the answer was easy: lumps of precious metal in standardized weights stamped with symbols. Or, as we know them now: coins.

Lydia had plenty of electrum to spare; handing it out to mercenaries put no extra burden on the Lydian people. (Electrum, containing variable proportions of silver and gold, was hard to make coins of standard value out of, so early electrum coins were soon replaced with coins made out of pure silver or gold processed out of raw electrum.) Coins were easy to carry. Although the exact value of a given weight of metal could vary depending on local circumstances, a full year’s pay for a mercenary might amount to no more than a kilo and a half of silver or a tenth of a kilo of gold. Precious metals were in demand everywhere. Mercenaries from Greece, Thrace, or Caria could easily take their coins home and exchange them for land or goods. The symbols stamped on coins served in part to guarantee that they were minted to a standard weight, which made it easy for soldiers to confirm that they were being paid what they had been promised and that pay was distributed fairly.

The symbols on coins had another function as well. Early Lydian coins were marked with the heads of a lion and a bull. These images suggested harmony on many levels, including cosmological (the lion representing the sun, the bull the moon), ecological (lion representing the wilderness, the bull cultivated land and civilization), and social (predator and prey together as one). It was an apt symbol for a rich and powerful state recruiting the services of its poor and underdeveloped neighbors. The coins that mercenaries carried around with them were meant to remind them of their role as the hungry lions who fought for the rich Lydian bull and were rewarded for it. Not long afterward, kings began to put their own images and personal symbols on their coins, an even more pointed reminder to the mercenaries who received them of who they owed their loyalty to.

Not long after Lydians began minting coins, many other peoples began to do the same—some directly inspired by the Lydians’ example, others independently but for much the same reasons. The usefulness of these coins for facilitating trade soon also made them appealing to merchants, crafters, wandering minstrels, and lots of other people not embedded in the agricultural economy, but paying mercenary soldiers continued to be an important reason for kings and empires to mint coins for many centuries to come.

So the next time your hero returns to town after clearing out another dungeon full of monsters and gets a handful of coins as a reward, know that you are part of a very long tradition.

One thought on “Toss a Coin to Your Mercenary”