Cross foxes are a color variation of the red fox (like the silver fox, which I have heard of before). They seem to inhabit the more nothern reaches of the Northern hemisphere. 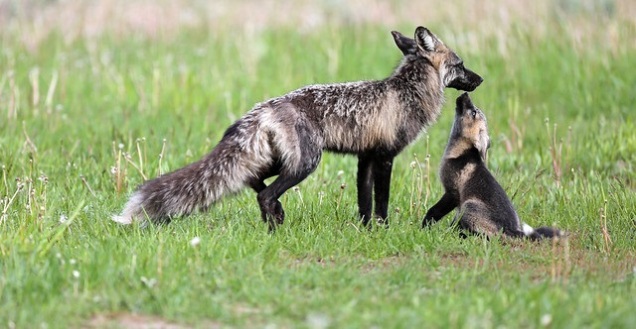 Looks like they can have a variety of fur coloring, from mostly black and grey with only a little red, to almost half and half.

What I can’t tell from the photos and texts is how bright the red coat might naturally be—I’ve seen some striking photos with really bright red and deep black. I suspect those may be photoshopped, but of course individual variation is always possible. And, naturally, if you wanted to use cross foxes with saturated red-black coats as inspiration for a fantasy story, no-one’s stopping you! 🙂

Images via Flickr: Father and child by The Humane Society of the United States (CC BY-ND 2.0). Side profile by Robert Kowaluk. Closeup by Stephen Brown.