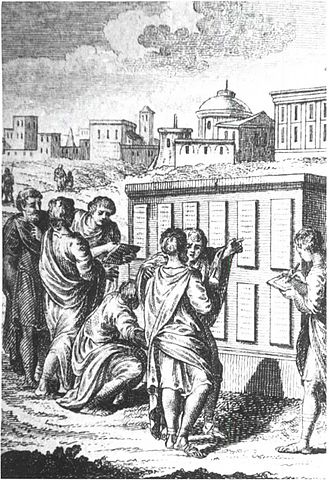 If you’ve ever had to make a choice with a group—picking what restaurant to go to for dinner with your spouse, what movie to watch with a bunch of friends, where to go on vacation with your family, etc.—you know how frustrating it can be. Some people like one thing, others like something else, some are happy with whatever, some have strong feelings, and yet everyone has to end up agreeing on one thing. In the worst case, you can get into uncomfortable power struggles over who gets to pick and who has to go along with someone else’s choice, which can just ruin what should be a good time for all.

When Romans went to court, the various parties involved had to agree on who would be the judge in the case. Roman judges were not legal professionals and did not make decisions of law (those fell to the praetor or another local magistrate); they were laypeople who heard the evidence of both sides and made a judgment on who was telling the truth, a role similar to that of the jury in modern Anglo-American law. Since judges were just members of the community, there was always a risk that any potential judge might favor one side or the other out of family loyalty, personal ties, business relationships, or similar factors, so the Romans needed some way to ensure that the judge chosen to hear a case would be acceptable to both sides.

Here’s how it worked. Every year, a list was drawn up of respectable members of the community who were eligible to serve as judges. This list was then randomly distributed across three tablets. When it came time for a plaintiff and a defendant to decide who would hear their case, they looked at the three tablets. First the plaintiff eliminated one tablet, then the defendant eliminated another, leaving just one. Then they took turns going through that last tablet, crossing off names one by one until just one name was left. That person was assigned to be the judge in the case: not necessarily either party’s first choice, but the one who was least unacceptable to both of them.

The same method can be a good way of choosing a restaurant, a movie or something similar for a group, as long as there are more choices than there are people in the group. Make a list of all options. Choose someone at random to start. That person crosses off one one option. The next person crosses one off, and so on in turn until only one option is left. It may not have been anyone’s first choice to start with, but it will be the one that will make everyone least unhappy, which is what you really need when trying to choose for a group.

In our house, we sometimes use this method when deciding what to watch together. We have been known to pull piles of DVDs off the shelf, then take turns putting one series or movie back until just one is left. (On a side note, this method also provides a convenient opportunity for dusting the back of the DVD shelf.)

Image: Artist’s vision of the Roman law of the twelve tables via Wikimedia