Another adaptation of the hugely successful tv series Game of Thrones is out. Embroiderers at the Ulster Museum and the Ulster Folk Museum produced a 77-meter long textile in the style of the Bayeux Tapestry.

Originally the embroidery depicted events, locations, and story from seasons 1 through 7, but in June 2019 further panels depicting season 8 were due to be added.

The R-rated tapestry was on display at the Ulster Museum earlier this year, but the exhibition page and a few small photos are still up on their website. 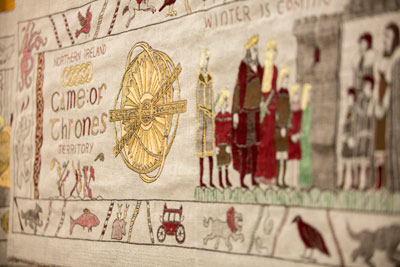 While we loved the production values for the show and the intricacy of the writing, we stopped watching after season 3 due to the upsetting amount of violence. I do confess, however, that this project really tickles the textile history geek part of my brain!

Images: Embroiderers at work by Paul Faith / AFP via Helsingin Sanomat. The others: Tourism NI via National Museums Northern Ireland.