In the 1970s, NASA designed potential space habitats in three basic shapes—toroid, Bernal sphere, and cylinder. Artwork depicting some of the plans has now been published in several sizes without copyright restrictions. Here’s the NASA description of the images:

“A couple of space colony summer studies were conducted at NASA Ames in the 1970s. Colonies housing about 10,000 people were designed. A number of artistic renderings of the concepts were made.”

Below are some of my favorites.

A version of cylindrical habitats has since been seen in popular media—Babylon 5, anyone?

The residential buildings look kind of cutely 1970s. (And I say this as a non-fan of the 70s aesthetic!)

Apparently all of these designs were meant for thousands of people: the toroid and spherical stations could house around 10,000 and the cylinder a million. Wow. They certainly did not dream small! 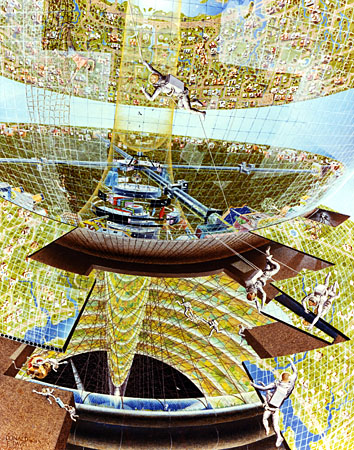 Visit the NASA’s “Space Colony Art from the 1970s” page for more images and links to high-res scans.

Found via The Public Domain Review.