Roxi tweeted a question, and we have answers!

In honor of infinity war, what's your MCU top 5? pic.twitter.com/EIc0KO0yL4

My honorable mention is a tie between Ant-Man (which surprised me positively but ultimately won’t make the list due to the annoyingly large serving of ham for a villain) and Thor: Ragnarok (Jeff Goldblum was a fun villain but he shouldn’t overshadow the rest of the fantastic ensemble).

I see quite a bit of Captain America on my list. I didn’t think I’d be team Cap. I have to say, though, there’s an appeal in stories of someone trying to re-gauge their moral compass in a fast-paced, fast-changing world they’re scrambling to understand. (Hold on. That sounds like I might be… middle-aged?!? *LOL*) 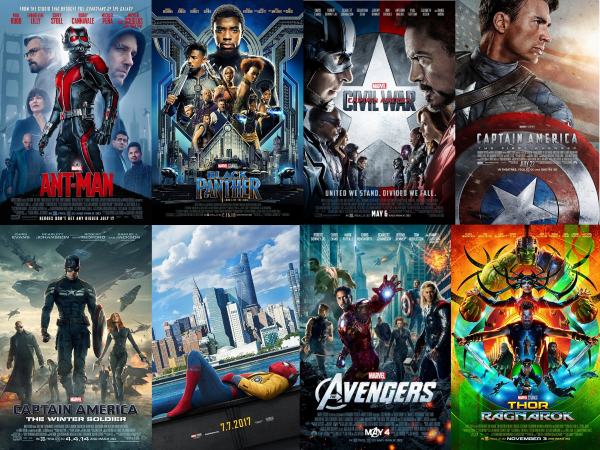 Erik here. My top five are:

All of these movies have a clear and relatively straightforward narrative concept which is backed up by excellent design, direction, and acting. They are also all definitively superhero movies, unlike some of the other Marvel movies which are heist capers, space operas, or character studies that happen to have superheroes in them. As a whole, I think Marvel’s cinematic corpus is stronger for having the variety, but the movies I like best are the ones that face the superheroism of their main characters head on. (Also, as much as I appreciate Iron Man’s role in getting the Marvel Cinematic Universe started and holding the first couple of phases together, there’s only so much Tony Stark I can take at one sitting.)

We suspect our lists will look quite different after this summer (with AIW now and Ant-Man and the Wasp due in July), but we’ll see.

Want to chime in?