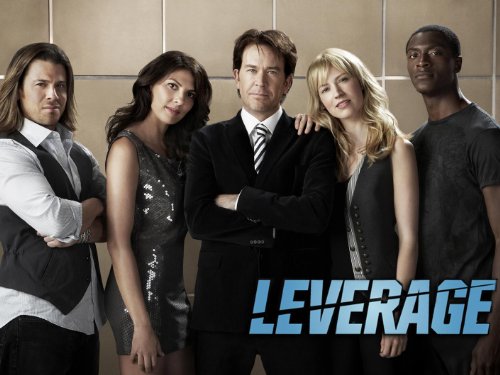 We’ve been rewatching and rating Leverage and we’ve got season 2 under our belts now. (For more on how our rating system works, see here, which also covers season 1 of Leverage.) Here’s our take on the season.

This season is a lot of highs and lows. Several weak episodes are balanced out by a number of strong ones. The average for the season is 5.7, which is respectable but a step down from season 1, which averaged just under 6. The show was finding its footing this season and striking out in some new directions, which sometimes paid off but other times just fell flat.

We have a four-way tie for the best episode, all at a solid 8. In “The Three Days of the Hunter Job” the team manufactures a government conspiracy in order to discredit a ruthless reporter. In “The Two Live Crew Job,” they compete with another team (featuring Wil Wheaton as a pain-in-the-ass hacker!) to steal a priceless painting. In “The Ice Man Job,” Hardison, the hacker, gets in over his head while trying to show that he can get out from behind the computer and do an in-person grift, and the rest of the team has to improvise a heist around him to get him out. In “The Three Strikes Job,” the whole team get in over their head as they get tangled up in a larger plot involving the mob, the FBI, and a corrupt mayor. All of these episodes play with the heist/con formula in interesting ways and give the actors a chance to stretch their wings and tackle something new. In these episodes, we really see the creative team’s willingness to tinker with the mechanics of the procedural format pay off well.

The lesser episodes of the season also show attempts to vary the formula, but they don’t come off as well. The worst of the season is “The Top Hat Job,” at only 2. In this episode, the heist is pretty simple and most of the screentime is taken up by the team’s distraction event: Nate, the most mediocre and uninteresting character on the team, putting on a mediocre and uninteresting magic show.

Any Leverage fans out there want to weigh in? Got a different pick for the best or worst episodes of the season? Let us know in the comments!