More than 3,500 kilometers separate the tombs of the Valley of the Kings in Egypt from the village of Ølby in Denmark, but thousands of years ago they were connected by trade. 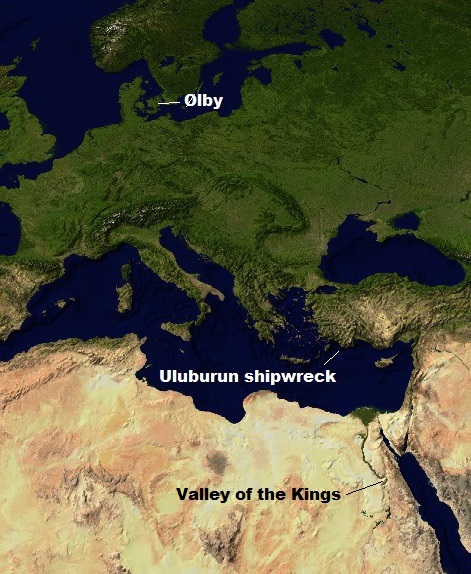 Recent archaeological work has identified a blue glass bead found in a bronze age woman’s grave in Ølby as originally Egyptian. In fact, based on the composition of the glass, researchers have suggested that the glass bead was made in the same workshop that produced the blue glass inlay on Pharaoh Tutankhamun’s gold funerary mask. Similar beads are known from several other Danish burials. In an age when glass-making as a skill known only in a few regions, colorful glass beads were as precious as gemstones.

Glass beads like these could have come to Denmark in exchange for amber from the shores of the Baltic Sea. Amber was highly prized in the ancient Mediterranean and not just as jewelry. It was sometimes fashioned into amulets for warding away evil or burned like incense. (The Roman naturalist Pliny the Elder complained about his fellow Romans’ superstitions about it; see: Pliny, Natural History 37.11.)

Amber has not been found in large quantities in Egypt, but it was used in some jewelry. In fact, one of the pectorals (pendants worn over the chest as amulets) wrapped up in the linen with Tutankhamun’s mummy is set with a piece of amber.

It’s unlikely that many Danes traveled to Egypt or Egyptians to Denmark in the bronze age. More likely both amber pieces and glass beads were carried short distances by chains of traders in between. Small, easily portable, but high-value objects like beads and gemstones are perfectly suited to this sort of down-the-line trade. A ship that was wrecked off the coast of Turkey around the same time as Tutankhamun’s burial (known as the Uluburun or Kaş Shipwreck) may have been part of that trade network. The ship, whose home port may have been in northern Syria or on Cyprus, was carrying both blue Egyptian glass and Baltic amber when it went down. Also in the ship’s cargo, interestingly, was a gold scarab inscribed with the name of Nefertiti, queen to Tutankhamun’s father Akhenaten (though she was not Tutankhamun’s mother).

The evidence of archaeology is always a bit haphazard in nature. So much is unpredictable about what artifacts survive and what gets found. We are lucky to have the evidence from both the tombs of Tutankhamun and the woman in Ølby, as well as the Uluburun shipwreck, to help us trace out the lines of connection between Egypt and the Baltic. There is no question that connections between different peoples in the distant past were deeper and stronger than we know, but the evidence to document those connections has been lost.

Historians (at least those of the responsible sort) are limited by evidence, but fiction writers don’t have to be. When building your fictional worlds, let the fragments of evidence from our own inspire you to imagine far-flung connections and enterprising traders. Connections like these have always been important.

One thought on “Connections: Denmark and Egypt”