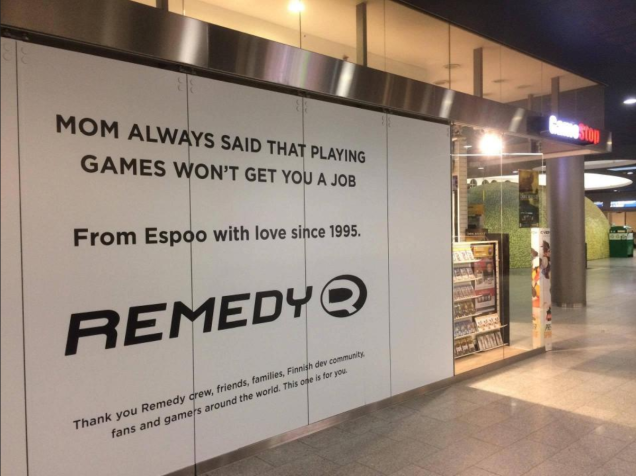 “Mom always said that playing games won’t get you a job. From Espoo with love since 1995. Thank you Remedy crew, friends, families, Finnish dev community, fans and gamers around the world. This one is for you.”

Remedy (of the Max Payne and Alan Wake fame) designed this ad to celebrate their April 05, 2016, launch of a new game, Quantum Break, reportedly the most expensive entertainment production ever made in Finland.

The ad’s irony at one’s own expense sounds very Finnish to me. In Finland, it’s a little embarrassing to be successful or rich, and Finns don’t tend to draw attention to their achievements. At the same time, as a Finn, it’s very satisfying to see Finnish game companies grow up into mature businesses with large, world-wide audiences.

It’s also high time for people to recognize that storytelling is an integral part of human nature and that games are just as viable a medium for telling stories as are myths, songs, novels, image-based art, and the like.

Image by Jussi Pullinen via Nyt.

Disclosure: A friend of mine works at Remedy, but this post is in no way compensated or even requested by them.