Here’s a look at how we made yesterday’s Farewell Feast in Bag End.

As with last month’s party, we have very little to go on in the text for an actual menu. Once again, this requires some imagination, but this time I’m trying to imagine a small, intimate dinner for friends, not a grand party.

So, I started with fish and chips. It’s perhaps the second most famous dish in Sam Gamgee’s cooking repertoire (after stewed rabbit) and it’s just the sort of good, humble home food that a Hobbit leaving his ancestral hole for the last time might well want. (4.4)

Boiled cabbage is also simple, homely food, and Hobbits are no strangers to it. (Gaffer Gamgee scolds Sam for daydreaming about Elves and dragons instead of thinking of cabbages and potatoes.) (1.1) The addition of a sauce dresses it up just a bit for a gentlehobbit’s table. Mint and rosemary are a classic pairing of herbs and though neither is mentioned in the text, they are both widely used in European cookery, much like the sage, thyme, and bay leaves Sam gets for his rabbit stew. (4.4)

Berry soup is also not something attested in the text, although Hobbits are fond of berries and fruits, but it is an unpretentious dessert to go with a simple home-cooked meal. (6.9) This recipe is an old one from Scandinavia where fruit soups are still a favorite treat.

The Bagginses are fond of their wine (1.1), which was probably a minor luxury compared with the beer that seems to be the usual drink for Hobbits. (H1, 1.4) As we know that Frodo saved his wine from the grasp of the Sackville-Bagginses, we had a little white wine to go with the fish.

This is a simple recipe that shallow-fries the fish instead of deep-frying. The potatoes are actually roasted, not fried, but they have an excellent texture.

Dogfish (also called sand shark or cape shark) is the best fish for this recipe, if you can get it, but it’s a little uncommon in most fish markets. Any firm whitefish, like cod or haddock, will do, but flaky fish, like hake or sole, don’t stand up well to this kind of cooking.

Coating and frying the fish is a bit of an operation. I recommend having the flour, egg, and bread crumb bowls lined up next to the skillet and a plate covered in paper towels ready to receive the cooked fish.

A little boiling softens up cabbage and makes a nice side vegetable. The wedges tend to soak up a lot of water as they boil, so drain them well after cooking. They also have a tendency to fall apart, but it’s not hard to reassemble the layers to look nice on the plate.

This is a simple but versatile sauce that goes as well on meat as it does on vegetables. If you don’t have fresh herbs, dried will also do.

Serve this soup plain or with a little whipped cream. If you don’t have blueberries, the recipe takes substitutions of other berries or fruit well. 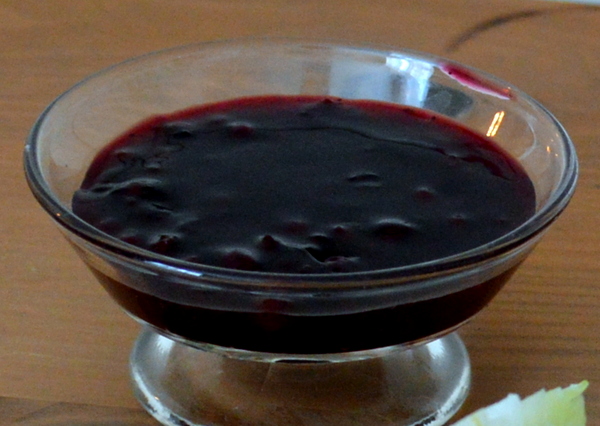 Tolkien tells us that Frodo’s dining room was “bare except for a table and chairs” but leaves the rest of the details open. Considering that the following day they packed and sent off to Crickhollow “another cart with the remainder of the luggage” and that Frodo “took his own tea with Pippin and Sam Gamgee in the kitchen” (1.3), it sounds like the house is pretty much empty.

There is some evidence, though, that Tolkien’s “bare” might be closer to a modern equivalent of a house with basic furnishings than an entirely unfurnished one. Not only do we not hear of the table and chairs being moved out (instead, it’s “the luggage” that is), but it also sounds like a portion of the furnishings is definitely to stay.

First, after lunch on the day following the farewell dinner, Lobelia Sackville-Baggins came to see “that nothing she had paid for had been carried off… It took a long while to satisfy her, as she had brought a complete inventory.” That cannot be trivial. Second, after Frodo’s tea, they “left the washing up for Lobelia.” (This tea sounds like tea-as-meal, i.e. more substantial than merely a cup of tea, but it’s impossible to say whether it’s more an afternoon snack than a dinner.) There must’ve been some dinnerware that either Frodo didn’t care about and left at Bag End or that belonged to the house.

On the basis of these snippets, then, you could argue either that Frodo preferred to have a comfortable meal with a tablecloth and all of the trappings that a gentlehobbit is expected to have, or that he wanted to make the move from Bag End easy and therefore kept things as simple as possible. I find both equally plausible, given Frodo’s character. 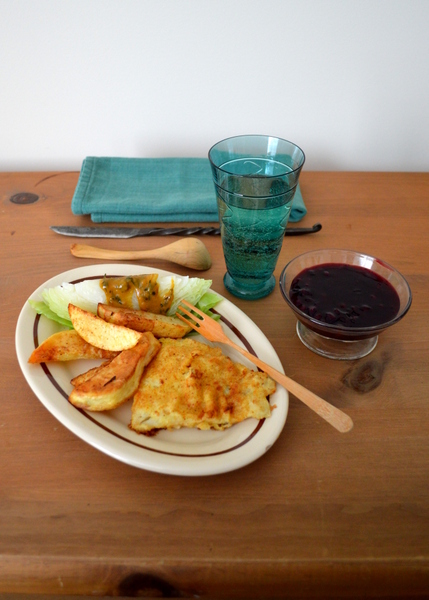 Since the “good wine” was explicitly not included in the sale, we went with the spirit of indulgence and picked a fancier glass for it. The glass is a replica of historical glassware from Sweden, bought years ago from Statens historiska museum shop in Stockholm. Unfortunately I don’t remember exactly when the originals were made; most likely they’re from the Roman age or early medieval period.

If I were to do this dinner setup again, I might swap the glass dessert dish (with a foot) with a small ceramic bowl (without one), but otherwise I probably wouldn’t change anything.

One thought on “Making A Farewell Feast in Bag End”