Now, I don’t typically go for horror or zombies, but I’m actually looking forward to this one: the trailers and clips make PPZ look kick-ass. Check ’em out:

“My daughters were trained for battle, sir, not the kitchen.” – Mr. Bennet

(There seems to be a bit of perv cam action going on. I hope this is as much as there is.)

I know nothing of the 2009 novel by Seth Grahame-Smith, but I do love some of the movie adaptation’s stars: Lily James as Elizabeth Bennet (James is no stranger to elegance based on her work in Downton Abbey) and Matt Smith (of the 11th Doctor fame) as Mr. Collins, and, finally, Charles Dance and Lena Headey (most lately, in genre interest, of the Game of Thrones excellence) as Mr. Bennet and Lady Catherine de Bourgh.

“I do not know what I admire more, Elizabeth Bennet, your skill as a warrior or your resolve as a woman.” – Lady Catherine de Bourgh

Ugh, pretty gruesome. Then again, it is a truth universally acknowledged, that to see and enjoy Pride and Prejudice and Zombies, one must be in a suitable frame of mind.

There will be murder and mayhem, surely…

…aaand apparently everything ends in a double wedding: 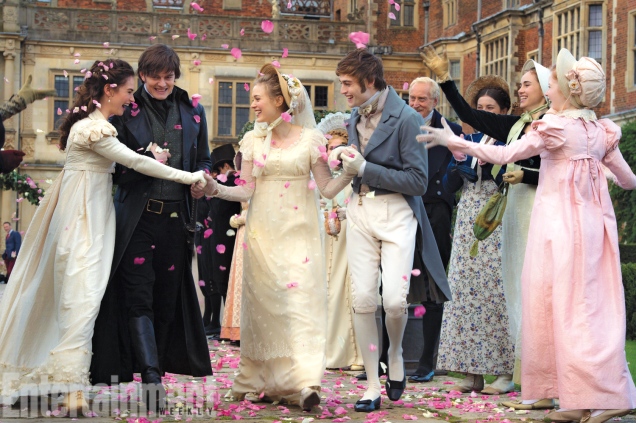 Seems like a combination of very silly and very kick-ass – “hopefully magnificently so,” to quote husband. 🙂

One thought on “Bloody Lovely: Pride and Prejudice and Zombies”