The rewatch continues with Episode III – Revenge of the Sith.

Eppu: The first part of the Obi-Wan vs. Anakin fight on Mustafa. The second part (after they leave the facility and fight outside) doesn’t work for me; it’s too prolonged.

Erik: Yoda vs. Darth Sidious in the Senate chamber.  Ian MacDiarmid’s performance as Palpatine is nicely subtle and nuanced. As Sidious, he chews the scenery up one side and down the other and it’s glorious.

Erik: Palpatine: “Good is a point of view.” One of the most chilling hints we get in this movie that the difference between the Jedi and the Sith is not so great as we might have thought.

Eppu: “Another happy landing.” Obi-Wan after crash landing the droid cruiser that “kidnapped” Palpatine was kept on. Ewan McGregor’s delivery retains just a little of a young man’s cockiness that he’s not supposed to have as a Jedi master.

Eppu: Well, there weren’t that many minor characters (with lines) in this movie. It’ll have to be Senator Organa. 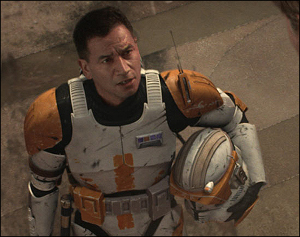 Erik: Commander Cody. He has a nice bantering relationship with Obi-Wan, before the whole Order 66 thing happens.

Erik: When the clones start attack the Jedi. We knew it was going to happen, but it’s still shocking how easily they switch sides.

Eppu: Palpatine so callously trading Dooku in for a younger apprentice. The expression on Dooku’s face was of such shock, there’s no way he saw it coming, which means Palpatine’s successfully played him for years if not decades. This man clearly would sacrifice anything and anyone to get where he wants, in case anyone was still wondering.

Eppu: Again, Obi-Wan and Anakin crash landing the droid cruiser that “kidnapped” Palpatine was kept on. How epic is that!

Erik: When Yoda kills the clones who were coming to Order-66 him. You don’t get to be head of the Jedi council by collecting box tops.

Erik: Anakin/Vader entering the Jedi temple with clone troops behind him. One of the few times that Hayden Christensen actually managed to be as menacing as the character was supposed to be.

Eppu: In the very beginning, two one-man fighters rotate around a cruiser and reveal a huge space battle over Coruscant. Of course, there’s no sound in space, but the hand-waved-let’s-pretend-there-is sound design worked so seamlessly with the visual that I’m willing to forgive it – just this once.

Eppu: Visibly pregnant Padmé in a completely black outfit after Obi-Wan left Coruscant to go after Grievous and Anakin came to see her. Easy to miss its significance, because Padmé has worn navy blue or other dark-colored dresses before. Of course we know what her fate’s going to be, but it’s a nice reflection of the future in a visual form.

Erik: Palpatine in the chair on the droid command ship, ready to sacrifice one apprentice in order to gain another. Comparing this scene with its echo in Return of the Jedi says so much about the difference between Anakin and Luke.

Images: Another happy landing via The Jedi Master. Commander Cody via Jedi Temple Archives. Attack on Jedi Temple via Wookiepedia