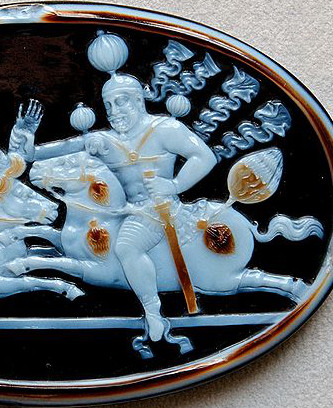 … Marcus Licinius Crassus would have been the first emperor of Rome instead of Julius Caesar.

Stick with me here.

Alfalfa is a plant in the pea family that resembles clover. It originally comes from south central Asia and was cultivated in the northern parts of the Iranian plateau as animal fodder. Compared with other fodder plants, alfalfa is very high in protein, so it is mostly fed to cattle. It can be given in small amounts to most horse breeds, but in large amounts it causes bloating as horses cannot use the excess protein.

The exception is Nisaean horses, a breed of horse that was developed in northern Persia and bred to feed on alfalfa. These horses were able to absorb the extra protein of alfalfa into their bones, giving them denser, stronger bones than other horses. These dense bones enabled the Nisaean horses to make sudden turns while galloping at high speed that would have broken other horses’ legs and to carry heavier weights than other horses of the ancient world could manage.

The Achaemenid Persian empire, and the Parthian empire after it, used the unique abilities of Nisaean horses to full advantage on the battlefield, both to field heavily armored cavalry (including Parthian cataphracts) and for highly mobile mounted archers. Nisaean horses allowed the Persian cavalry to make sudden surprise attacks and feints to disrupt the order of enemy infantry and the famous “Parthian shot” maneuver in which riders charged the enemy and suddenly wheeled away to create chaos, then turned and fired their arrows over their horses’ rears into the confusion. These tactics were especially effective against infantry-heavy armies like the Roman legions, who first encountered Nisaean horses at the battle of Carrhae in 53 BCE.

Marcus Licinius Crassus, one of the wealthiest men in Rome, had made a private pact with two other ambitious politicians: Gaius Julius Caesar and Gnaius Pompeius Magnus. Crassus believed that he had never been properly recognized for his military achievements (notably leading the fight against Spartacus’ slave rebellion) and wanted a command in which he could win an impressive victory. Caesar and Pompeius helped him get assigned to lead a campaign against the Parthian empire, Rome’s rival in the east. Roman armies had recently won easy victories against other eastern states, so Crassus probably expected a similarly easy campaign. He raised a large army at his own expense and marched off in pursuit of the Parthians.

The Parthian general Surena led the Romans through the desert far from water sources. When the Romans were exhausted from long marches and cut off from supplies, Surena launched the attack. Parthian cataphracts and mounted archers used their superior mobility to hem the Romans in and wear them down with feints and sudden attacks. Romans were accustomed to facing cavalry and had developed tactics that were usually effective, but they were unprepared for the capabilities of the Parthians’ Nisaean horses.

With his forces debilitated by the Parthian attacks, Crassus finally agreed to peace talks with Surena. The talks went badly and Crassus and many of his officers were killed. Most of the Roman army was captured or killed on the field and the survivors straggled back to Roman territory.

If Crassus had defeated Surena and gone on to capture some the Parthians’ major cities in Mesopotamia, he would have returned to Rome even richer than when he left with an undisputed victory over Rome’s greatest rival to his credit and a battle-tested army of veterans at his back when Julius Ceasar was still mired in Gaul and deeply in debt. While we don’t know what ambitions Crassus had beyond getting recognition as a general, if he had been inclined to seize power in Rome, no one would have been in a position to stop him.

Surena decisively out-generalled Crassus at Carrhae and alfalfa alone doesn’t explain how he did it, but without alfalfa, no Nisaean horses; without Nisaean horses, no cataphracts or Parthian shots; without those tactics at his disposal, Surena would have had a much harder fight on his hands.

This may sound like just a curious “for want of a nail” story, but there’s a larger point here about worldbuilding: even very small choices have big consequences.

If you want warriors who fight from horseback, they have to have horses capable of carrying them and their gear effectively in combat. Those horses need suitable fodder, which has to grow somewhere. Add to that the need for training both horses and riders and maintaining a large enough breeding stock to keep your warriors supplied with mounts and you have your society’s economy and ecology more or less determined for you.

Big effects can come from even smaller things, too. If your characters eat bread and cheese, then your world has to have flour and milk. That means grain fields and dairy farming, which require certain kinds of climates and geographies and create an agricultural year of ploughing, sowing, and harvest, calving, grazing, and haying. Patterns of labor, settlement, and seasonal movement all respond to the needs of agriculture and pastoralism. The entire shape of your world can be dictated by lunch.

4 thoughts on “In a World Without Alfalfa…”