There are a couple of persistent myths floating around about how the Library of Alexandria was destroyed. One says that it was burned down by Julius Caesar in the first century BCE, the other that it was destroyed by Christians in the fourth century CE. Both of these stories are wrong. That’s not what happened to the Library. The actual history is instructive, especially now. 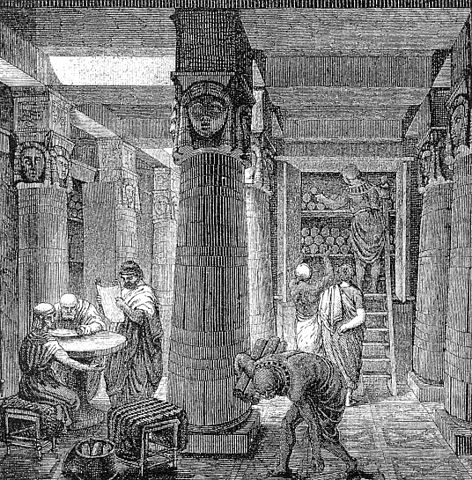 The story begins with the foundation of the Library itself. After the death of Alexander the Great, his followers fell into a fifty-year struggle for control of his empire. When the dust settled, three major successor states founded by Alexander’s generals controlled most of the eastern Mediterranean and the old Persian Empire: the descendants of Antigonus in Macedonia, the descendants of Seleucus in Syria and Mesopotamia, and the descendants of Ptolemy in Egypt. Other, smaller, states, some of them also led by former officers of Alexander’s army, filled the edges and the gaps in between the Antigonid, Seleucid, and Ptolemaic kingdoms.

Ptolemy and his dynasty ruled from Alexandria, the new city founded at the westernmost mouth of the Nile by Alexander during his campaign. The Ptolemies and their court made up a small Greco-Macedonian elite ruling over a vast and ancient land whose people had a strong sense of cultural identity and a long history of resistance to foreign rule. The Ptolemies faced two major problems in ruling their kingdom: competing against the other successor states, and asserting control over the native population of Egypt.

A large part of the challenge in both cases came down to questions of culture. The Ptolemies needed to attract skilled administrators and mercenary soldiers to staff their bureaucracy and enforce their rule, but they were competing with all the other successor kingdoms who wanted the same people for the same reasons. One way of drawing desirable recruits to Alexandria was to demonstrate the richness and refinement of the Ptolemaic court. At the same time, maintaining order in Egypt meant reaching some degree of accommodation with members of the native elite who could keep the peasants in line. To Egyptian nobles who were proud of their own history and culture, the Ptolemies had to show that they were worthy partners who could live up to the standards of culture and sophistication Egyptians expected from their kings.

The Ptolemies’ propaganda approached these challenges in many different ways, but the Library was one important part of their cultural program. Under royal patronage, the Library amassed the largest collection of literary works in Greek assembled anywhere in the Mediterranean. In doing so, it projected the Ptolemies’ cultural sophistication in the common language of the eastern Mediterranean world. It was one of the institutions that made the city of Alexandria noteworthy and demonstrated the Ptolemaic kings’ power and wealth.

The Library of Alexandria was not created as a benevolent or altruistic center of knowledge. It was as much a part of power politics as the king’s mercenary army, and it could be as ruthless in its operations. Ships arriving in Alexandria were reportedly ransacked for any texts the Library might be lacking. The Library borrowed the official texts of winning dramas from the Athenian state archives, then kept the originals and returned cheap copies. The collection was only accessible by royal permission; it was not a place for the public.

Maintaining such a large collection required a dedicated staff of both specialist curators and laborers. Adding new texts to the collection took a lot of work to prepare the papyrus scrolls on which they were recorded and house them safely, but just maintaining the collection was a major job in itself. Papyrus scrolls are not permanent; they break down over time, even in the best conditions. Every text in the Library had to be periodically recopied as the old scrolls decayed. All of this work was funded by the Ptolemaic kings, for whom the Library was an important prop to their power.

In the mid-first century BCE, Julius Caesar fought a campaign in Alexandria against the reigning king Ptolemy XIV in support of his sister Cleopatra, who would go on to rule as the last Ptolemaic monarch. During the fighting, Caesar’s troops set fire to some of the ships in the port. The fire spread to some dockside buildings, including warehouses that held papyrus intended for the Library. The exact extent of the fire is unclear. While some ancient sources report that the Library itself suffered damage, it is clear that the most of the collection was unharmed, and the loss was largely of materials, not finished texts.

Decades later, after Cleopatra was killed and Egypt was annexed to the Roman Empire, however, the Library went into decline. The later Ptolemaic kings had been less enthusiastic in their support of the Library than the earlier kings had been, and by the first century BCE the Library was already a diminished institution. With no Ptolemaic dynasty to prop up, it no longer served a purpose. Some Roman emperors showed an interest in the Library, but most had no desire to keep supporting an institution that rivaled their own propaganda works in Rome. Without money to pay for upkeep and repairs, to pay the salaries of librarians and workers, the Library of Alexandria faded away. Support from the local elite kept some of the collection intact, some part of which remained active as a much smaller, provincial version of its former self through the third century CE.

Just how long this reduced version of the Library continued on is unclear. The third century was a time of widespread violence and unrest in the Roman world, and Alexandria had always been a rowdy city prone to riots. The growing community of Christians in Alexandria sometimes participated in these upheavals, but they were far from the only ones. In one famous incident, an attack by pagans sparked a Christian counterattack which wrecked a Neoplatonist school, but there is no record that any books were kept there. Whatever was left of the collection may well have suffered in the violence of the times, but by then the Library-with-a-capital-L was a thing of the distant past.

There is a lesson for us in the end of the Library of Alexandria, but it is not one about the brutishness of Caesar or the violence of early Christians. What doomed the Library was not some act of willful destruction but the slow decay that comes on when there is not enough money to keep basic operations going. In these days when we all find our budgets stretched tight, it is important to remember how much the cultural institutions we depend on also depend on us.

As many people have noted recently, the covid-19 pandemic isn’t the apocalypse we expected. We like to imagine that great things end in cataclysm, not in the slow grinding down of underfunded institutions. We prefer the bang to the whimper. But just like the Library of Alexandria, the establishments we rely on—be they local libraries, theater companies, independent bookstores, niche comics publishers, or anything else—will not be destroyed by invaders or violent mobs. They will wear away by inertia and neglect. Now is the time to show your support, in whatever ways you can manage, to the things that make your life brighter, richer, and fuller.

Image: A modern artist’s interpretation of the Library of Alexandria via Wikimedia (19th c.; engraving; by O. Von Corven)

One thought on “How We Lost the Library of Alexandria”