Today they two of us talk over Captain America: Civil War. If you haven’t seen it, be warned: there will be spoilers. 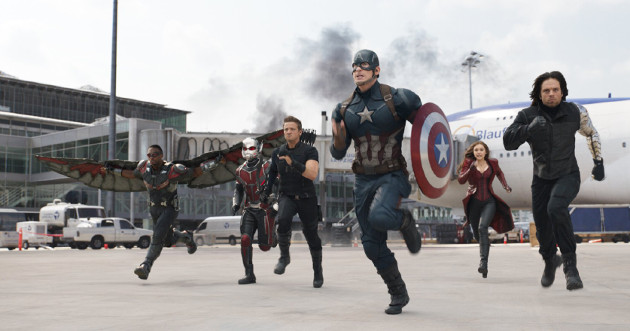 Erik: There’s a lot to talk about in this movie. I was really impressed by a lot of it. While the story was mostly a Steve / Tony two-person play, the movie handled the large ensemble of its cast better than most movies have done. The airport fight was the most glorious and heartbreaking superhero fight we have seen on film. But the strongest impression the movie made on me was the disconnect between how I feel about the real world and how I feel about the fictional world. In the real world, there is no way I want super-powerful people with military technology running their own private armies accountable to no one. In the fictional world, there’s no way I want my superheroes beholden to bureaucrats who think nuking Manhattan is a viable plan and snicker at the suggestion that the guy they arrested based on a grainy security camera shot is entitled to a lawyer.

Eppu: I agree in general terms. My first impressions were mostly positive, but I’ve come to reconsider some of them. Bear with me as I think out loud.

The large cast didn’t materially slow things down. In a way, I’d wish for even more (even though I know that pragmatically it’s pretty much impossible). Also, this movie is the first Marvel Cinematic Universe flick to include three black men as protagonists. Like Michi Trota says, “See what happens when you have more than one marginalized person as characters in your story and they’re given the same thought and consideration as your starring white dudes, Marvel? It makes your movie better.” [original emphasis]

I’m still waiting for more women, though, especially black and Asian women. For example, Ming-Na Wen would be fabulous and plays an already established character within the current Marvel screen adaptations. (Getting her character into the movies would take special convolutions, but you get the point.)

Plotwise, I got the impression from the trailers that the rift between Team Cap and Team Iron Man would be nastier than it turned out to be; glad I was mistaken in that. The main problem I have—assuming that we’re trying to take the fictional world seriously—is that the plot bends over backwards to assure us of something inherently contradictory. Tony Stark is supposedly siding with the Sokovia Accords and stands for formal measures to control the superpowered / supersuited. Yet, he persuades a highschooler (Spidey) to join his posse in a decidedly dangerous fight, naturally deceiving said highschooler’s legal guardian in the process, and detains a foreign national (Wanda Maximoff) who hasn’t committed any crimes in her time in the U.S. (and doesn’t even seem to have any international warrants out for her arrest either)—and we’re supposed to believe NO-ONE on his team HAS ANY FREAKING PROBLEM with Stark’s actions.

I’d believe Tony Stark to be arrogant and self-centered enough to imagine himself such a special snowflake that he can pontificate in favor of outside control and yet immediately turn around to launch a containment spree from a vigilante’s wet dream. However, others on Team Iron Man cannot be so deluded, especially not Vision who’s so pure of intent in Civil War he’s the only other character able to lift Mjölnir. It’s enough to give me a painful whiplash.

Erik: You’re right about Vision; I hadn’t even thought of that. The rest of the people on Tony’s side I can buy as either not knowing the full details or accepting Tony’s decisions as the least worst option, but, given his portrayal in Age of Ultron, there’s no way Vision should be okay with it all.

It strikes me that one of the consistent (and annoying) tropes of the superhero genre is that in order for superpeople punching / shooting / zapping at will to sound good as a mechanism for world security, the mundane alternative has to be made vicious, corrupt, stupid, or ludicrously incompetent (nuking Manhattan, HYDRA infiltration inside SHIELD, secret submarine prisons, etc.). Tony Stark seems to have fallen victim to this same effect in Civil War. Rather than represent an honest argument for reasonable oversight of a super-powered private army, he stands for the same cynical, rules-are-for-other-people kind of thinking that gave us the aforementioned near-nuking of Manhattan, HYDRA, etc.

I rather feel like Tony’s character has gone off the rails since Avengers. His behavior in Age of Ultron didn’t make any sense at all (then again, neither did most of what people did in Ultron). His actions in Civil War just follow on from Ultron without making any more sense. It’s really hard to see how we got from Tony “you can’t have my stuff” Stark of Iron Man II to Tony “we need to be kept in check” Stark of Civil War. I guess you could say I can see where Tony’s coming from, but not where he thinks he’s going.

Eppu: “The rest of the people on Tony’s side I can buy as either not knowing the full details or accepting Tony’s decisions as the least worst option […]” Alright, yeah; I can see that. I suppose that was the intended reading.

Erik: Yeah, Civil War did a lot better at explaining people’s motivations than Ultron, but I could do with just a few more lines to help explain why anybody is still on Tony’s side by the end of the movie.

Eppu: Agreed. I’m tired of Tony Stark. Yes, Downey Jr.’s performance is fantastic, but I’m so over his character. He’s had such a pervasive presence in many of the MCU movies. How about letting other characters shine for a change instead of wallowing in yet another middle-aged straight white cis man’s issues. (At least he isn’t a fedora-wearing alcoholic… Leverage, anyone?) Black Panther, for instance, was given a touching emotional arc with actual development even if he didn’t get that much screen time. What a great place to continue, isn’t it? (Hoo-boy, 2018 is so far away!)

Another thing that the movie did do really, really well is include a clear sense that there are no easy answers and that no-one was right, and that the Avengers do care for each other even in the middle of the fighting.

Erik: All credit to Downey’s acting (we might not even have a Marvel Cinematic Universe if it weren’t for his incredible performance in Iron Man), but I’m ready to see how the MCU gets on without him. I can’t wait to see more of Black Panther, and more of the characters who have been secondary so far. (Since you and I have been watching Agents of Shield season 2, I’m starting to really want a Melinda May / Maria Hill buddy-cop movie.)

Eppu: Oh yeah—a movie with Agent May and Agent Hill learning to work together and solving problems. Where can I throw money at that?!?

I definitely will want to see the movie again, though. Preferably with subtitles, but we’ll probably need to wait for the DVD for that. Those really help you catch more of the dialogue. I’m still half-sure there’s something I missed about various Avengers’ motivations; either that, or the character writing really doesn’t hold up terribly well.

Erik: Yes, definitely looking forward to seeing this one again. Things that weren’t clear on one viewing might fall into place with a second. To the movie theatre, Batman! (Wait, wrong franchise!)

That’s it from us. Feel free to jump in the comments and tell us what you think.

Images: Still from Captain America: Civil War via IMDb. Text message by Texts from Superheroes via Tumbling Down the Goblin Hole