We finally got around to seeing Ant-Man a couple of days ago. I know that movie is so last month and everybody’s moved on to other things, but I have a few thoughts to share. There will be spoilers, just in case you’re even later than me in getting around to this movie. 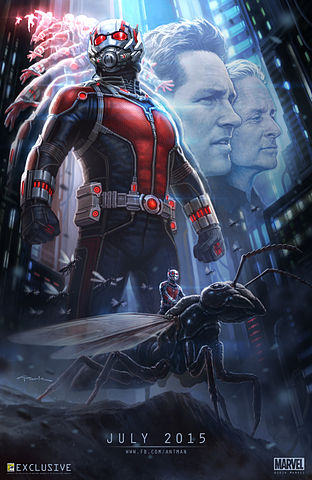 I liked Ant-Man. I put it in the middling range of the Marvel moves along with the first and third Iron Man films. It kept me entertained on a hot summer day, it held together a lot better than the noble failure that was Avengers 2, and it didn’t insult me like last summer’s Guardians of the Galaxy. The jokes landed, the characters were interesting, and the story was fun. My strongest impression of the movie, though, is that it kept asking and conspicuously failing to answer one question: Why is Hope not putting on the suit?

The central plot of the movie is the heist to steal and destroy the Yellowjacket weapon prototype before evil corporate genius Darren Cross can unleash it on the world. Inventor Hank Pym recruits good-hearted cat burglar Scott Lang to don the Ant-Man super-shrinking-and-insect-mind-control tech to get the job done, even though Hank’s daughter Hope van Dyne is obviously a better choice. She already knows about the technology and how to use it. She has access to the facility that is the target of the heist. She is smart, cool-headed, and tough. Why do they need Scott?

The movie half-heartedly offers a few possible answers, but it seems to be aware that none of them really holds up.

Because Scott is such an awesomely inventive cat burglar

Eh. The script does the bare minimum job of showing us Scott thinking on his feet. It’s okay, but it’s hardly persuasive. In any case, the Yellowjacket heist is already planned out; not much on-feet thinking required. At best, Scott could be useful on the coms Leverage-style to advise Hope in case of surprises. We really don’t see any of that vaunted inventiveness at play in the heist.

Because Hope needs to stick with Cross during the heist

Apparently not, because she really doesn’t do anything important during the heist besides help a wounded Hank get out of the building. Her presence with Cross doesn’t seem to make any contribution to pulling the heist off.

That’s fine. He can worry. We all worry about the people we care about. Pepper Potts worries about Tony Stark. Laura Barton worries about Clint. That’s not a reason for them not to suit up and get the job done when it matters.

Because she gets to be Wasp in the next movie

I give Ant-Man credit for at least tacitly acknowledging that none of these reasons stands up. We need more good female superheroes (and villains, for that matter) on our screens and there’s no good reason why we don’t have them already. I take Ant-Man as an admission from Marvel that they recognize the problem, and that’s a step towards fixing it. Whether they are willing to take the next step of actually giving us the female characters we’ve been waiting for is another unanswered question.