Arkady Martine wrote at Tor.com on disaster stories and human behavior, noting a pattern on concentrating on the catastrophic and awful. That, however, has been proven a myth, at least initially:

“Humans do not, under the pressure of an emergency, socially collapse. Rather, they seem to display higher levels of social cohesion, despite what media or government agents might expect… or portray on TV. Humans, after the apocalypse, band together in collectives to help one another—and they do this spontaneously. […]

“Humans all over the world display this behavior after disasters. They display it consistently, no matter what kind of disaster is happening or what culture they come from.

“What really happens after an apocalypse? Society works better than it ever had, for a brief time.” [original emphases]

Yay, us! We did evolve as and still are highly social creatures.

Now, how long this century’s phenomenal technological change takes to alter that and in which ways remains to be seen. I have high hopes of our curiosity and drive to engage with others, however. That may be a bit funny for a huge introvert to say, but there it is. 🙂 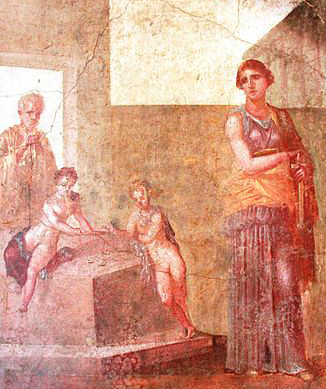 One of the hallmarks of modern storytelling is toying with the conventions of a genre. Familiar stories get retold with surprising twists and the tropes that everyone can see coming are turned upside-down and inside-out. It’s not just a modern game, though. Older stories can be just as cunning with their twists. When I’m trying to think about how to do something different with a familiar tale, one of the examples I look back to is Euripides’ tragedy Medea.

Medea is one of the classics of ancient Greek theatre. There are plenty of good translations available and it’s not hard to get your hands on one. If you’re looking for an online edition, here are a few. I discussed the play before in comparison to Star Wars, so I won’t bore you with summarizing the whole plot again (check the link if you want a quick reminder). Rather, I want to talk about two interesting things Euripides does with the story.